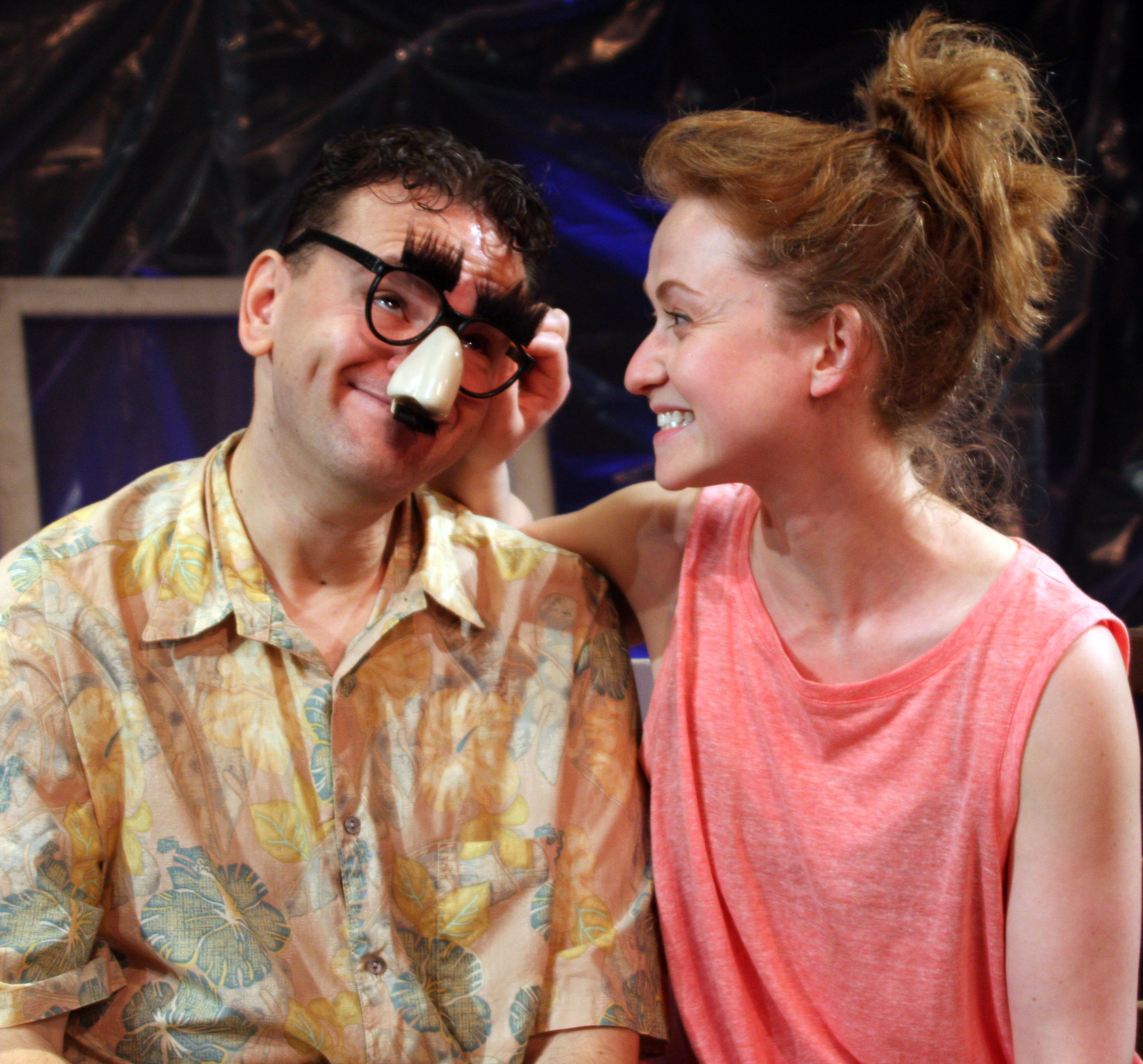 If you think that the concept of an â€œimaginary friendâ€ is a harmless childrenâ€™s play, that means you have never watched â€œKallie,â€ a play written by Stuart Dâ€™Ver and directed by Elowyn Castle. As far as the protagonist, Kallie (Rachael Jenison), is concerned, she has a double, Allie, which is her rational, sane side. It is no coincidence that Allie takes away Kallie’s boyfriend, Jimmy (Kohler Mckenzie) and is absent when Kallie is attacked by rats, who crawl around her whole body and get inside her ears.

Paying attention to details and conversations, we soon realize that only some scenes take place in reality, but most of the action happens in the protagonist’s head. As a result, we see the world the way Kallie’s disturbed brain sees it.

And quite an interesting world it is.

First, the people Kallie meets always look like someone she knows. Accordingly, the actors play several roles. For example, the train conductor (James Nugent) resembles Kallie’s father (James Nugent), a plastic surgeon, who is about to marry a woman of his daughterâ€™s age. Moreover, the two men even act in a similar manner. Both are dignified gentlemen approximately in their 50-60s with round bellies and some authority, though the conductor maintains his distance, while the father shows love and concern for his child when she gets into trouble.

And whatâ€™s even stranger, Kallieâ€™s ex, Jimmy, also resembles her current boyfriend, Zander (Kohler Mckenzie), a bartender with an aspiration to become a sommelier. â€œSommelier is a nice word; itâ€™s French,â€ he explains, and we realize how little substance he has. Zander is self-centered and aloof to Kallieâ€™s cries for help when she tells him about her fears of rats in the basement, where she is doing his laundry. She wants attention, and he wishes to be left alone with his studies. She wants love, and he feeds her with pills. â€œOnly the bartenders know the best recipes,â€ Kallie says later in the play. Apparently, the recipe for a womanâ€™s happiness is not one of Zanderâ€™s know-hows.

However, as far as violence is concerned, the protagonist is not always the victim. Sometimes she strikes first, but the sad part is that she does not remember attacking anyone. It always seems to her that sheâ€™s the one being attacked, and not only by rats. One missed pill – and someone can get hurt. For that reason, we begin understanding both Zander and Jimmy, who eventually refuse dealing with her, knowing what she is capable of.

Hence, though the actors do a great job portraying different characters and switching from one personality to another, the most difficult part is that of Miss Jenison. Playing Kallie, she manages to make us sympathize with the protagonist and even believe her until we realize that she is an unreliable narrator. Kallieâ€™s mood changes quickly; she displays passion and then suddenly becomes reserved and apologetic. She throws herself at men, looking for love, though, according to her, Jimmy was â€œthe only one who pierced [her] soul, but then it shut close.â€ In this sense, she is a typical romantic heroine, whom no one understands and who is taking on the world on her own. She even talks like a romantic heroine. For example, in response to Zanderâ€™s question, â€œYou donâ€™t like red wine?â€ Kallie says, â€œI loathe it. It stains the heart.â€ Moments like this make the play both dramatic because we feel her pain, and humorous.

Brightening up the playâ€™s otherwise dark reality, humor becomes the spoonful of sugar that turns a tragedy into â€œa surreal comedy of madness and love,â€ as the program puts it. Thus, unlike Zanderâ€™s, Stuart Dâ€™Verâ€™s recipe is a successful one, with right proportions of depth and entertainment, allowing us to delve into human psyche and at the same time do not stay there long enough to lose our own sanity.