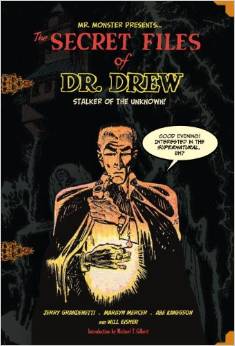 The 1940s were ripe with detective comics. This was a time when â€œDick Tracyâ€ was in its prime. This was also a time when comics started going into more fantasy/horror. One of the comics from this era was â€œThe Secret Files of Dr. Drew.â€ Though only releasing 14 issues, this series had some followers. Dark Horse has compiled all 14 comics into one volume for a new generation to read.

To0 bad the new generation wonâ€™t be amused.

The stories are about the detective Dr. Drew who investigates cases of the occult and bizarre. He comes to blows with the likes of gypsies, and elevator that goes to the thirteenth floor of a building that does not have a thirteenth floor and vampires. Heâ€™s sort of like Sherlock Holmes if his stories were more horror than mystery.

These comics are a product of their time. They read like how practically every detective comic was like back in the 40s. The only reason this series has any followers is because back then there werenâ€™t many comics that combined detective with fantasy/horror.

Ever so, these stories are the usual detective finds the paranormal monster popular at the time and gets rid of it before he continues to do harm. Itâ€™s a formula modern readers will find boring.

The art is also a [product of the time. Many modern readers will say it looks too much like â€œTails from the Crypt.â€ In fact, that series has taken its style from comics like â€œDr. Drew.â€ Of course, after decades it looks like everything weâ€™ve seen before.

Besides the comics, this compilation has biographies of the creators Jerry Grandenetti, Marilyn Mercer and Abe Kanegson. As with any biography, these give some insight on who these people are and what their other works are. Theyâ€™re interesting reads for anyone whoâ€™s into comic history.

â€˜The Secret Files of Dr. Drewâ€ is more comic book history than entertaining. It may have been one of the first of its kind, but the tropes associated with the genre will not please the average reader. Comic collectors may find something to love here, but the big picture here if youâ€™re not a collector reading this collection should only come from pure curiosity.