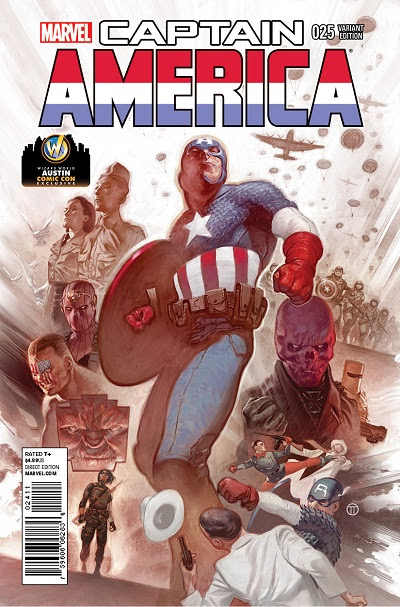 Marvel Comics and Wizard World, Inc. (OTCBB: WIZD) today revealed the latest edition of the 2014 series of exclusive variant covers of the best Marvel titles with the unveiling of Captain America #25, drawn by Argentine artist Julian Totino Tedesco. VIP attendees at the Wizard World Austin Comic Con, October 2-4 at the Austin Convention Center, will receive a free copy of the limited-edition book at registration.

Totino Tedesco is scheduled to be on site at the event to sign copies of Captain America #25 (autograph fees may apply). Leading professional comic grader CGC will also be on hand to accept books for grading and Signature Series.

The exclusive version of Captain America #25 will be limited to 3,000 copies and provided free at registration to all Wizard World Austin Comic Con VIP attendees, including any celebrity VIP packages.

â€œJulian Totino Tedesco is one of the best cover artists in the industry,â€ says Marvel SVP David Gabriel. â€œSeeing each of his covers for Original Sin come in each month was a joy and we couldnâ€™t be happier with his Wizard World exclusive variant cover to the final issue of Captain America.â€

The Eisner-Award nominated Totino Tedesco is a native of Buenos Aires who began working on American comics about five years ago. He has drawn covers for many titles, including Marvel books Season One, Uncanny X-Force, Thunderbolts, John Carter: Gods of Mars, Original Sin and others.

â€œWe see as many fans cosplaying Captain America at our shows as just about any character,â€ says John Macaluso, Wizard World CEO. â€œThat shows the enduring popularity of ‘Cap,’ and Julian Totino Tedesco has certainly brought that to life with this exciting cover.â€

Who is the All-New Captain America? The conclusion to the story that began in Dimension Z as Zola strikes in unison with The Red Skull! The final fate of Jet Black! Rated T. Writer: Rick Remender; Artists: Carlos Pacheco, Stuart Immonen.

Morena Baccarin (â€œHomeland,â€ â€œStargate SG-1â€), Evan Peters (X-Men: Days of Future Past, American Horror Story), WWE Phenom The UndertakerÂ® and Katie Cassidy (â€œArrow,â€ â€œGossip Girlâ€) are among the celebrities scheduled to attend Wizard World Austin Comic Con. It is the 13th of 16 events in the 2014 series produced by Wizard World, Inc. (OTCBB: WIZD) and will also feature a top-drawer collection of well-known comics artists and writers and a variety of activities, exhibitors and special attractions.

For more on the 2014 Wizard Austin Comic Con, go to www.wizd.me/AustinPR.

"Time Travelers and Bonfires" will be a collection of brand new songs, along with re-recorded Sevendust classics. Newly re-recorded songs...