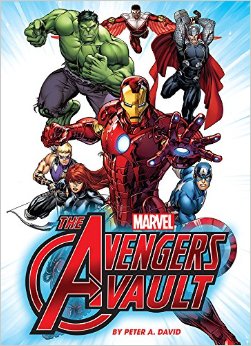 For Tony Stark’s Iron Man- “his armor can protect him against anything, except himself.” No one trusted the Hulk from the start. The Wasp feared him and the other original members wondered how to keep an eye on him. These are The Avengers, a group of superheroes who didn’t trust each other and contained an “ever changing roster.” Peter A. David’s “The Avengers Vault” is a compendium of the original members of The Avengers, their sometimes convoluted backstories and villains they have faced.

Remember the Marvel Universe biographies? During the 1980s and early 90s they could be bought to be collected in three-ringed binders. What was great about them was they showed group affiliation, who they were created by, where they first appeared among other stats. These bios of heroes, villains and regular people who were important to this universe gave a sense of continuity. With the expansion of the internet these notebook-bios may have seemed obsolete. However, the physical reference materials were like baseball cards. People would seek out the next issue and trade what they needed to complete their collections. We no longer live in that world, still there is a need for the comic book fan to find out why these characters, particularly in the films are so important.

Take for instance Captain America “The First Avenger.” In the comics Bucky Barnes was initially a teen who was a ward of the state and Cap even bow guarded Rick Jones, the Hulk’s sidekick for a period of time. Also, Captain America’s defrosting was not as traumatic as told in the films. Having only been shelved for barely a generation, Captain Steve Rogers did not experience a 70-year culture shock. Thus making his fellow Avengers closer to contemporaries. More importantly “The Avengers Vault” explains the “retconned” backstories of Cap and some of the other Avengers.

What’s sorely missing from this reference book are the important details and storyline arcs that make these characters intriguing. Tony Stark’s alcoholism is given a mention with the comic-book numbers. That seems at the very least insufficient to satisfy the current reader or the fan of the movies. Also what about when Tony Stark was shot by his girlfriend who was on Prozac? That was a catalyst for major stories that are still reverberating throughout the Marvel Universe.

Then there’s “The Incredible Hulk.” Although his origin and the reason why he changed from gray to green is intact, there isn’t anything that discusses the storyline where Peter A. David brought the Hulk to the smart, gray entity who was fully in touch with his intelligent self – the man who was experimenting with gamma radiation, the man who has the title Doctor before his name. Ironically the same David who wrote this book penned this storyline and worked with artists from Todd McFarlane to Adam Kubert. The Pantheon arc was also important to the Hulk’s background and contributed to his alienation from the Avengers.

What may also peeve the reader of this compendium is the way Black Widow and Hawkeye are treated. Although originally villains, they are in this current incarnation of the comics and movies, complicated characters whose allegiances should be discussed more in depth, rather than a blurb in the villain section.
This reference book is not a complete loss. There are copies of the original artwork of Jack Kirby and of some of the covers from early editions from the 1960s. There’s also a composite of the cartoons that traces The Avengers televised history. One thing that would have really made this section memorable is to show the lyrics of these early animations. Those who were desperate for any type of Thor or Captain America on screen have practically memorized those lyrics. They are almost as iconic as the Wonder Woman theme song of the 1970s.

For the new fan of this team that has existed for some, near 50 years, it is a succinct starting point. But if you know “When Captain America throws his mighty shield” means, then you may find this material wanting.

About Donna-Lyn Washington 618 Articles
Donna-lyn Washington has a M.A. in English from Brooklyn College. She is currently teaching at Kingsborough Community College where her love of comics and pop culture play key parts in helping her students move forward in their academic careers. As a senior writer for ReviewFix she has been able to explore a variety of worlds through comics, film and television and has met some interesting writers and artists along the way. Donna-lyn does a weekly podcast reviewing indie comics and has also contributed entries to the 'Encyclopedia of Black Comics,’ the academic anthology ‘Critical Insights: Frank Yerby’ and is the editor for the upcoming book, ‘Conversations With: John Jennings.’