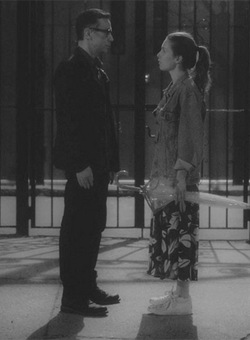 On the surface, â€œGeorge and the Vaccumâ€ is a black and white short film that features former â€œSaturday Night Liveâ€ alum Fred Armisen, but it ultimately plays with something we all understand- letting go of someone we love.

It all starts with Lucy (Sophia Takal) and George (Armisen) ending a date. Innocent jokes display a level of comfort and familiarity flood the scene.

â€œI can never really get rid of the dirt,â€ George ironically says after recalling a terrible nightmare he had about trying to clean up a mess that manifested from a little pile of sand to an entire desert.

Wacky jokes and metaphors aside, this film is the journey we all go through letting go. Going around and around trying to figure out what their next step will be, George wonders what went wrong.

He comes to realize he is continuing the cycle all over again in his head. Lucy takes on the role of his subconscious trying to get him out of that loop- a loop that he tries to ignore. At the end of his journey, we see Georgeâ€™s â€œhome,â€ a brick house with a black gate and door. There are no windows or any resemblance to what someone would call home. It looks as if he never actually went in, like he never made his own mark on it.

In the end, in her own way, she tries to give him the courage to move on, but we wonder if heâ€™ll ever do so.

Regardless of what Georgeâ€™s fate will be, our time spent with him is intriguing.