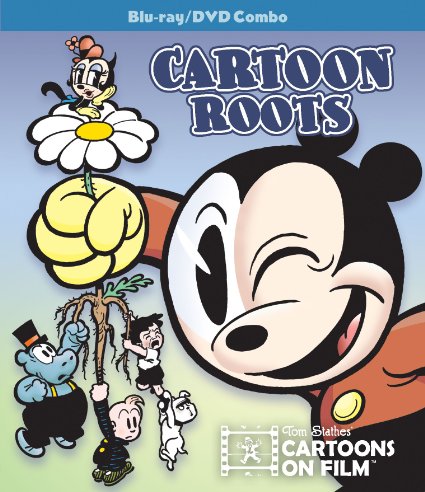 People love cartoons. No matter what the age, there are people who will watch and love them. For the past few decades whenever you ask people about cartoons theyâ€™ll usually bring up Warner Bros or Disney. There are a ton of cartoons before these two studios came about that everyone has forgotten about. Tom Stathes, owner and proprietor of â€œCartoons on Filmâ€ has been restoring these cartoons for years. His biggest accomplishment is releasing a Blu-Ray/DVD combo called â€œCartoon Rootsâ€ that showcases these cartoons.

You will not find any Disney or Warner Brothers characters here. These cartoons are of characters from the 1910s and 1920s though many of these animators have gone on to work for one or both companies. The characters include Detective Heeza Liar, Mutt and Jeff and Dinky Doodle among others. While unfamiliar today, these names were big in their day. This collection showcases what Stathes considers to be their finest work.

One thing that might put off many modern viewers is that not only are these cartoons in black and white, but they are also silent. Once you get past this modern prejudice you can see why these cartoons were hits in their day.

One of the most striking is â€œLightning Sketchesâ€ which features animator J. Stuart Blackton painting objects that come to life. The most amazing thing about this is the cinematography and editing. While these tricks are common place today, they were unheard of in 1907. That is also one of the biggest reasons to watch this.

Some of the other ones can be grouped together in that they are pretty much product of their times. This isnâ€™t a negative thing; they are entertaining to watch in their own right. The thing that will stand out is how obvious the layers are. Itâ€™s obvious that the characters are moving in front of a flat background. While this is a basic animation technique, this is hard to notice in cartoons released in the past few decades. In the early days itâ€™s blatantly obvious.

The one that stands out as the weakest is â€œCartoons on Tour.â€ Here itâ€™s various people reading an animatorâ€™s comic strips. The stories arenâ€™t all that interesting and the real peopleâ€™s story is easily forgotten.

One of the biggest problems with any film from that era is finding any reels in good condition. The quality of these reels look amazing. Stathes and Co. have done a fine job of not just restoring the reels, but finding reels that are in good condition.

Stathes and Co. went all out with the extras. There are Sunday comics which feature characters from these cartoons, drafts of scripts and even comparisons between two different cartoons. Anyone interested in cartoon or even film history will adore these extras. The comparisons at first sound like Stathes is trying to find anything to put on the Blu-Ray, but these comparisons actually show how scenes are exactly the same.

â€œCartoon Rootsâ€ is a great showcase of old forgotten cartoons that have been restored masterfully. Despite some downfalls that stem from modern viewpoints this is one collection that is a joy to have for anyone interested in cinema/cartoon history or just likes old cartoons in general.