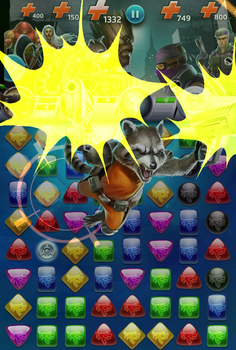 Whatâ€™s better than a puzzle game with Marvel characters? One that has an awesome gameplay engine like D3 Publisherâ€™s â€œPuzzle Questâ€ and features the storyline from the classic Marvel Dark Reign run.

With tons of characters awesome abilities and easily over a hundred levels, this is simply one of the best takes on the â€œPuzzle Questâ€ formula yet. Although weâ€™re only a handful of hours into the game, the comic book-inspired story, bevy of cool characters and abilities make the match three puzzle game more than the sum of its parts.

Those that have played this game on Android and iOS remember it as addictive, but not being bound by the limitations of the mobile game, â€œMarvel Puzzle Quest: Dark Reignâ€ will immediately harken many older gamers to the series on the Xbox 360. Just as immersive, but with a better story, itâ€™s the type of game you can invest a few minutes in if you need a quick fix, but also something you can spend hours with.

It also helps that the game has top shelf art. While the animations for special attacks are solid as well, itâ€™s those character cut-outs and comic book covers that add an extra level to the eye candy. Overall, with tried and true gameplay, the visuals arenâ€™t the most important element, but itâ€™s a nice touch and itâ€™s something that shows D3 and Marvel worked extremely closely on this title.

Through our initial gameplay, itâ€™s fair to say that â€œMarvel Puzzle Quest: Dark Reignâ€ is an incredibly deep puzzle game that can and will steal hours of your time.

About Patrick Hickey Jr. 12618 Articles
Patrick Hickey Jr. is the Founder, Editor-in-Chief, Master Jedi and Grand Pooh-bah of ReviewFix.com and is the author of the book, "The Minds Behind the Games: Interviews with Cult and Classic Video Game Developers," from leading academic and non-fiction publisher McFarland and Company. He is currently the Assistant Director of the Journalism Program at Kingsborough Community College and is a former News Editor at NBC Local Integrated Media and a National Video Games Writer at the late Examiner.com. He has also had articles and photos published in The New York Times, The New York Daily News, Complex and The Syracuse Post-Standard. Love him. Read him.