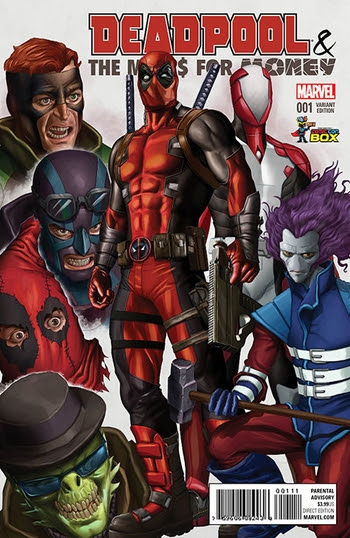 Wizard World, Inc. (OTCBB: WIZD) and Marvel announced that the “Deadpool & The Merc$ for Money #1” with variant cover by Greg Horn ComicConBox™ will be available in the February box just in time for Deadpool’s big screen debut.

Deadpool might be an Avenger now, but he’s also got his own private team of mercenaries… the legally-cleared-to-be-called Mercs for Money. Got a problem you can’t solve on your own and a pile of money you’d like to be rid of? Just call Deadpool, Stingray, Massacre, Solo, Foolkiller, Terror and Slapstick and watch as that problem is shot, stabbed, eviscerated, pulverized and generally made bloody! Writer: Cullen Bunn; artist: Salva Espin.

The Deadpool movie hits theaters February 12. The movie chronicles a Special Forces operative turned mercenary, who is subject to a rogue experiment. It leaves him with healing powers and he adopts the alter ego Deadpool.

ComicConBox™ packages will be sent to U.S. members on or around the first week of each month.

The 2016 Wizard World Comic Con schedule is available at: www.wizardworld.com/wizcon.html .

Review Fix chats with Alek Wasilewski, the creative mind behind the unique point-and-click adventure “Tsioque.” Currently looking for funds via...