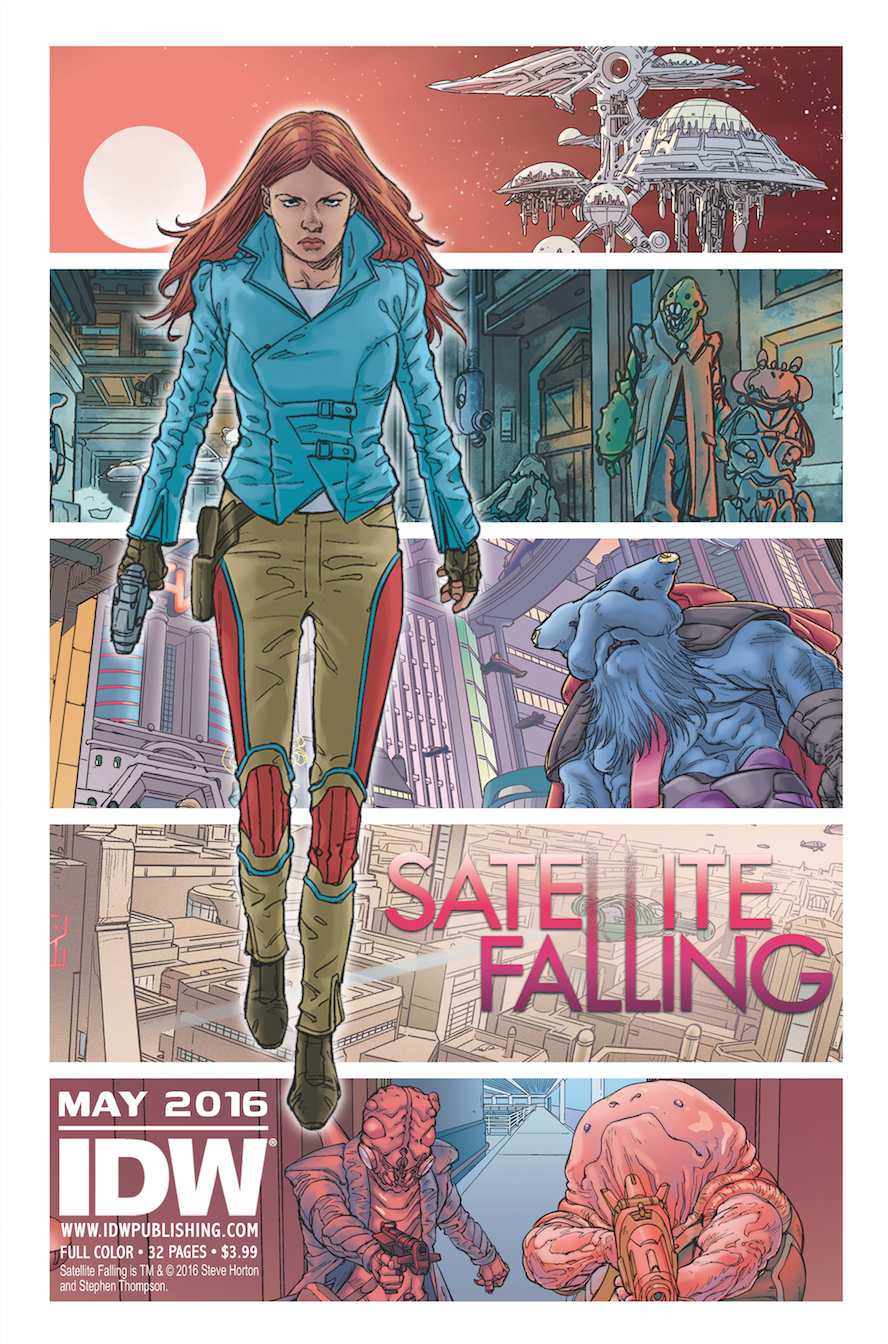 Satellite Falling, the latest original series on the horizon from IDW Publishing, kicks off this May, a month replete with creator-owned launches from the publisher.

The sci-fi-themed crime drama introduces readers to unique aliens, settings, and characters, wildly imagined by writer Steve Horton (Amalaâ€™s Blade), beautifully rendered by artist Stephen Thompson (Star Trek, Brooklyn Animal Control), with vibrant coloring by Lisa Jackson (Angel). Satellite Falling tells the story of a lone human bounty hunter who jettisoned off her home planet after losing the love of her life, and now resides on a satellite spaceport full of aliens. Life, as she knows it, is about to take a turn for the surreal.

With Satellite Falling, Horton intends to explore similar themes he has tackled on past projects, but bringing those concepts to a more cosmic atmosphere. He promises â€œkick-ass heroines, wall-to-wall action, weird-ass dialogue, and amazing artwork.â€

Industry vets such as Dan Jurgens (Booster Gold) are echoing those sentiments, who exclaims, â€œSatellite Falling presents an exciting new world of intrigue and potential, populated with characters that very quickly make us feel as though weâ€™ve known them for a long time. Jump in for an impressive start!â€

As mentioned, joining Horton on this off-world adventure will be his newest collaborator, Thompson, whose otherworldly art will effortlessly transport fans to an eye-catching universe like no other that instantly sets Satellite Falling apart from other sci-fi sagas.

Satellite Falling marks Stephen Thompsonâ€™s creator-owned debut, who jumped at the chance to take on art duties for this ambitious project. â€œSteve pitched a few concepts my way, and the idea of a single human working as a bounty hunter in a place otherwise inhabited entirely by aliens, haunted by her lost love was too good to pass up.â€

In addition to Hortonâ€™s breathtaking standard cover for issue #1, retailers can also order a Variant Cover from Judge Dredd artist PJ Holden in addition to a Retailer Incentive Cover by June Brigman (Power Pack). Thatâ€™s just for starters with more exciting variants on the way for future issues!

Satellite Falling will crash land at your local comic shop this May!