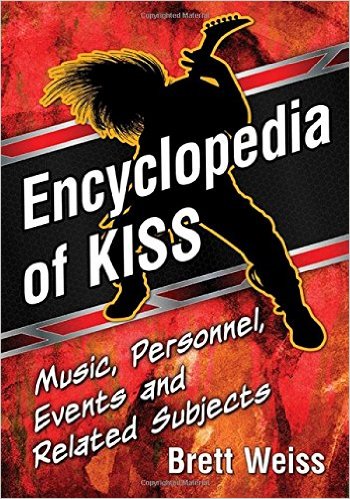 Review Fix chats with author Brett Weiss about his new KISS encyclopedia, breaking down the inspiration for the book and why, after all these years, KISS still matters.

Review Fix: What was the inspiration for this book?

Brett Weiss: Three years or so ago, I went through a phase where I was reading every KISS book I could get my hands on. It occurred to me that no one had over done an encyclopedia on the band, even though such musical acts as the Who, the Stones, the Beatles, the Grateful Dead and Elvis had encyclopedias. KISS is in the same conversation with those guys regarding their iconic nature, so I figured it was long overdue that someone write such a book. Since Iâ€™m a freelance writer and have been a huge KISS fan since the mid-1970s, it seemed like something I should doâ€”fill a gaping hole in the music and reference book publishing industry. Fortunately, the editors at McFarland Publishers agreed with me, and the rest is KISStory.

Weiss: Like the Beatles, KISS influenced countless singers and musicians to grab a microphone and/or a musical instrument, including such popular acts as Garth Brooks, the Red Hot Chili Peppers, Lenny Kravitz, Motley Crue, Pearl Jam, Poison, Bon Jovi, Twisted Sister and Marilyn Manson. Further, their music is timeless, especially their first six studio albums, their first two live albums (Alive and Alive II), and Creatures of the Nightâ€”those records rock! Most of their other music is awesome as well. And the band is still recording, performing, and making public appearances today (such as their Rock & Brews and LA KISS events), and you can hear â€œRock and Roll All Niteâ€ during various games in sports arenas all around the country.

Review Fix: How has KISS played a role in your life?

Weiss: Sometime around 1975 or so, I discovered the band through my older brother and some of his friends. I was eight- or nine-years-old and completely blown away by Alive!, one of the three or four greatest live albums of all time. I was mesmerized by the subsequent recordsâ€”what I call the second Holy Trinity of KISS albumsâ€”Destroyer, Rock and Roll Over, and Love Gun. I would play those records over and over again on our hold furniture-style stereo while starring at the covers, especially Destroyer and Love Gun. The fantasy, larger-than-life depictions of KISS by Ken Kelly are phenomenal, and I love every song on those albums. The makeup, blood, bombs, and all of that is cool, but it is the music that has kept me a KISS fan for 40 years.

KISS has affected me from a more personal standpoint as well. When I was a kid, before I know about any of the problems in the bandâ€”the in-fighting, Paulâ€™s insecurities, Ace and Peterâ€™s alcohol and drug abuse, etc.â€”they were my larger than life heroes, a colorful, cool, and exciting contrast from such hassles and mundanities as school, chores, and getting sick all the time (I had bad bronchitis, allergies, etc., which Iâ€™ve outgrown, thankfully). Some of the most exciting times in my young life were KISS moments: the first Marvel comic book, watching KISS Meets the Phantom of the Park on TV when it originally aired (I loved every second of it, even though it is cheesy seen through adult eyes), pouring over the various magazines and making my own scrapbook, and finally getting to see them in concert for the first time in 1983. Sadly, I didnâ€™t get to see them in makeup until the 1996 Reunion Tour, but that was awesome as well. KISS is an amalgamation of sorts of many of the things I loved as a kid and still enjoy: rock music, monsters, mystery (who were these guys behind the makeup?), comic books, spectacle, and science fiction.

Review Fix: What did you learn about the band through this book?

Weiss: I learned crazy things about Vinnie Vincent and his ex-wives. I learned that Tom Arnold and Dallas Taylor rushed to the aid of a homeless person who they thought was Peter Criss (check out the â€œPeter Criss Imposterâ€ entry in the book). I learned that Geneâ€™s son Nick was accused of plagiarism. I learned that Tony Powers, who wrote â€œOdysseyâ€ from Music from â€œThe Elderâ€ also wrote â€œWeâ€™re the Banana Splitsâ€ from the old Saturday morning kidsâ€™ show. I learned about obscure movie and TV appearances by the band members, more than I ever wanted to know about KISS condoms, and much more. I learned KISS was featured in an Animaniacs comic book. Encyclopedia of KISS is filled with this kind of stuff–I learned a TON.

Weiss: The publisher insisted on a generic cover because they wanted to avoid copyright violation and any negative attention from the band. The inside of the book, however, is all KISS all the time, including photos.

Review Fix: Why should a KISS fan own this book?

Weiss: Virtually everything important to know about KISS is conveniently laid out in alphabetical order in this one volume, plus thereâ€™s an insane amount of minutia and obscure trivial tidbitsâ€”the kind of stuff dedicated KISS fans will enjoy. The book provides detailed information on songs, albums, tours, special events, girlfriends, family members, solo projects, current and former members, movie and TV appearances, comic book appearances, and much, much more. Plus, I quote experts, band members, family members, critics, etc. Researchers, historians, music journalists, and casual and hardcore rock KISS should enjoy the book.

Weiss: Lots of writing. I need to wrap up the next book in my â€œClassic Home Video Gamesâ€ series and then maybe get started on a possible sequel to The 100 Greatest Console Video Games: 1977-1987. I recently interviewed Lydia Criss, so that should be on my website soon: www.brettweisswords.com.