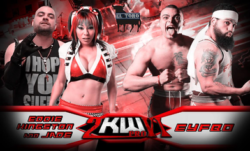 The Bronx was treated to stiff, fast-paced wrestling action as 2kw pro wrestling celebrated its second anniversary with a fun and enjoyable show.

Overall, 2KW Pro brought the fight to the Bronx. It gave fans hard-hitting action and lots of fun. The crowd was engaged and interacted with the talent well. The promotion has cemented itself as a part of the wrestling landscape in New York City.

Facebook Live Match Bulrog vs. Nolan Avila:  vs Nolan Avila. Avila got his offense in early but Bulrog battle backed and managed to ground Avila keeping the masked wrestler of his game. Bulrog struck hard at his opponent reversing a top rope suplex into a reverse Rock Bottom for the win.

G.O.A.T. (Raze, Whiplash, and Kris Kage) vs. Certified Sexy (Geno Da God, Sasha X, and Nutrious X): Six-man tag match: The amazing skills of Bulrog were followed up by the hard-hitting action of the G.O.A.T. They took on the team of Certified sexy in a six-man tag match that saw its fair share of tropes along with hard-hitting action care of the “King of Kaiju” Raze. The GOAT cut the ring off prevented Sasha, a member of Certified Sexy from getting in a tag. Raze ripped through each member of Certified Sexy. Only through a concerted effort of drop kicks from each member of Certified Sexy was the monster Rae taken off his feet. Whiplash, however, came in and cleared the floor holding onto Nutrious in a deep chin lock before hitting him with a Rolling Neck Breaker. Kage tagged in and control the action going forward before the Raze held up Sasha for two Super Kicks into a deep slam for the finish.

Sonny Kiss vs. Stan Styles: Styles saw Kiss overpower him early. Kiss struck with stiff acrobatic kicks, knocking Stan out of the ring. The enigmatic Kiss was going for a Suicide Drive before Styles pulled his Valet into the way. Giving Styles enough time to sneak up and perform a driver on the Kiss leading to a near fall. The action then took a heelish turn as distractions from the valet allowed Styles to land a Palm Strike for the KO win.

First Ever Women’s Match: Ashley Vox vs. Hellen Vale: Ashley Vox faced Hellen Vale in the first women’s match in 2KW Pro history. The crowd was even more invested in this match as they saw their very own Sonya Strong named guest referee for the match. Vox and Vale had great chain wrestling with Vox proving why the crowd was behind her. Vale worked Vox hard in the corner leading Strong to step in on more than one occasion. Despite the hard work from Vox, Vale hit a blistering Codebreaker for the win.

VSK vs. EA James for a Federated Contract: 2KW then played host to a match with inter-promotional implications. VSK from Federated made an appearance at the event to face off against E.A. James for a chance at a contract that could lead to the Federated title. VSK with Mr. Martinez, head of Federated, riled up the crowd before E.A. James came out to prove why he was the “Ultimate Challenger.” James and VSK had a great back and forth. VSK’s offense was crisp and well-timed. James was just as solid in his response with swift strikes and great reversals. James hit a thundering Suplex that led to a quick pin for the three count granting James a shot at Federated’s most fearsome wrestler and a path to the title.

Sir William Black vs. Sebastian Cage: The crowd was then privy to a black history lesson from Black, only for him to be cut off by Cage. Cage struck first forcing black into his ringside followers. The stylish wrestler then made sure that Black learned his lesson by hitting a Cross Body and forcing back to retreat once more. Black used on his followers to distract the referee allowing his followers to attack and set Cage up for a Pump Kick and a win for William Black.

EYFBO: Angel Ortiz and Mike Dratzik vs. Eddie Kingston and Jade: The main Event Saw EYFBO take on Eddie Kingston and Jade. The TNA Knockout star Jade took the fight to Angel Ortiz. Kingston worked the crowd hard as Jade and Ortiz fought in the ring. Eventually, Ortiz tagged in Draztik forcing Jade to Tag in Kingston. Ortiz and Jade engaged on the outside of the ring as Kingston and Dratzik dueled in the ring. Kingston struck with hard fists sending Dratzik reeling. But Ortiz managed to incapacitate on the outside allowing him to climb the top rope setting Kingston up for a Blockbuster and the pin for the victory.

General Hospital writer Scott Sickles is lucky. He know that as a playwright, ideas for the beginning and end of...