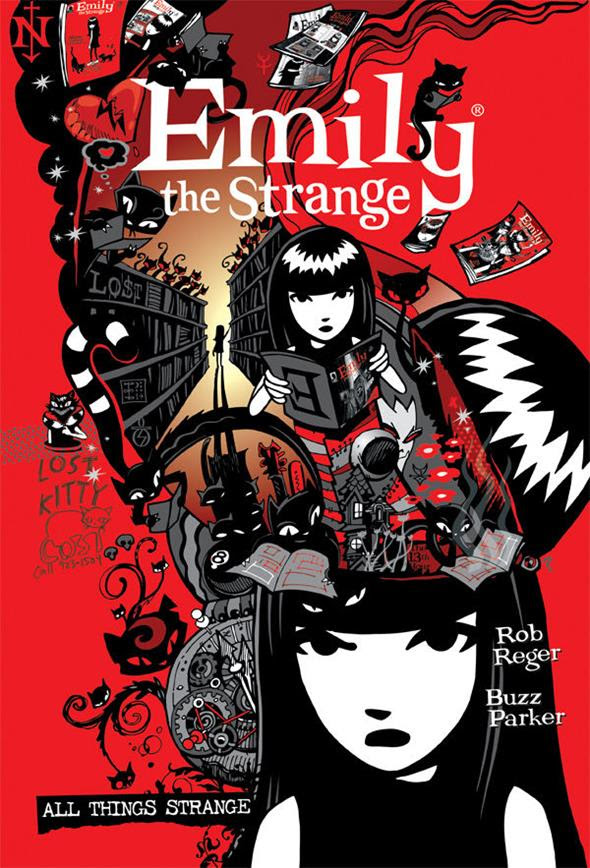 If youâ€™re a fan of â€œEmily the Strange,â€ there is a lot of stuff that will please you. Even though each comic is not a continuation of each other, many of the stories will please anyone looking for super weird stuff from their comics. From Emily having a conversation with vampires in a graveyard, to bringing a cat back from the dead to even asking the devil to make better plagues.

There are also other neat goodies. These are â€œinterviewsâ€ with rock/metal/goth legends like Marilyn Manson, Elvira and Karen O from â€œYeah Yeah Yeahs,â€ â€œScarytale Theaterâ€ which is a spoof of â€œMasterpiece Theaterâ€ top 13 lists and a whole lot more.

While some people may think this is a bit too much stuff for a collected edition, it actually makes sense. Emily is a character that works best in random situations than in a continued narrative. Yes, there have been novels and comic mini-series with Emily, all entertaining in their own right, but not as interesting as the mini stories.

Thereâ€™s a lot of different art going on here. While all of it is either black, white and gray; black and red or black, white, gray and red, there is still some variety. Thereâ€™s the normal cartoony look of â€œEmily the Strange,â€ then thereâ€™s the more gothic look and even a comic that looks like it belongs in â€œTales from the Crypt.â€ On top of that, there are comics that are nothing but a bunch of phrases scattered on the page, burying Emily in the process.

Of course, there are some minor nitpicks about this collection. As with any collection, some of the stories are rather dull. The interviews themselves also lack focus, which makes their overall quality suffer. Not to mention some the humor is on par with the worst â€œDisney Channelâ€ sitcom (too many jokes using the word â€œlostâ€ for one.)