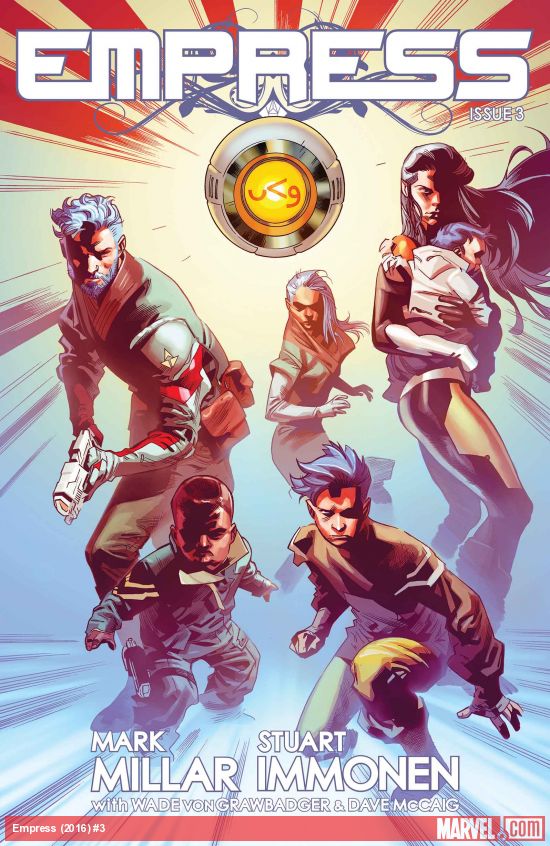 Mark Millarâ€™s sci-fi comic about and empress and her children fleeing from a tyrannical husband continue in â€œEmpress #3.â€ After two issues, the story is finally starting to show signs of quality.

The Empress and the gang find themselves on an ice planet being attacked by a giant monster. After a close call, they do more teleporting with Ship in order to get to the Empressâ€™s sisterâ€™s planet.

Thatâ€™s pretty much what happens in the entire comic besides seeing what Morax is doing. While that is the whole point of their journey, it is presented in an enjoyable way. It is becoming more apparent that Millar takes a while to build up steam because the writing has vastly improved since the first two issues.

There are still some issues with the story. First off, besides a nice conversation between the Empress and her daughter, giving some character development to the Empress, her kids are still useless. Dane is still the best character out of everyone. He seems to be the most well-developed and interesting character so far. Morax is also boring and you forget heâ€™s even there despite being the main antagonist.

While the story is improving, the art is slowly stagnating. The art may not be becoming PSA comic levels of crap, but what was once mediocre art is starting to look boring. Not to mention there is still the problem with how charactersâ€™ faces are drawn from a distance. This problem is starting to extend to how they look close up, especially with the children.

The new warrior race introduced in this issue also looks horrendous. They look like the outlines of yetis with almost no other distinguishing features.

After a weak start, the storytelling has improved while the art is losing quality. â€œEmpressâ€ wonâ€™t win any rewards are be remembered in ten years, but itâ€™s becoming an enjoyable airport read.