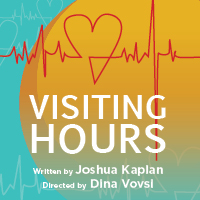 Review Fix chats with playwright Joshua Kaplan, who discusses his new production, â€œVisiting Hours,â€ which is playing at the NYC Theatre Lab from July 26-31.

Decades of conflict has left the Stein family set in an unspoken state of war. But when the familyâ€™s crazy â€“ though not insane — matriarch lands in the ICU, the perpetual silence is permanently broken, uncovering old wounds and creating new ones. Uncompromising in reflection and unflinchingly witty, Joshua Kaplan’s Visiting Hours follows the Steins as they attempt to navigate the present in the shadow of the past.

Joshua Kaplan: My mother passed away last summer. She was sick for a long time — in some ways, for my whole life — and when she was gone, I couldn’t get a handle on who I was and who I wanted to become. A friend suggested I try writing about the experience, which I couldn’t fathom at first. How do you write about a thirty-six-year-long roller coaster ride? I realized, though, that I could choose to write, notÂ aboutÂ her passing, as much as to write inspired byÂ it. So though there are elements of my life in the play, what the audience sees and hears is not meÂ but a reflection of a certain part of me, and hopefully a part of themselves as well.

Kaplan: Far less magical than I would like to admit. In terms of actual writing, it usually involves my couch, some Pandora (I prefer Pandora to Spotify, does that date me?), and a box of chocolate chip cookies. Before I even get to the writing stage I’ve probably been mulling over a general idea for several days, weeks, maybe months, often when I should be sleeping. I can spend hours inside my own head, writing scenes, characters, stories. Only 1% of my ruminations wind up on paper, and 99% of those wind up revised, edited, excised. I’ve learned that the mystificationÂ of the writing process has done far more harm than good. Too many people never write because they think they’re not supposedÂ to write on the subway, at lunch, during a coffee break. There’s no supposed to. You write when you write.

Kaplan: The subject matter is close to home, obviously. But more so, the combination of drama and comedy. Most of my previous work has been much heavier on the comedy side, which is where my writing instincts automatically take me. I tend to overwrite comedy and underwrite drama. With Visiting Hours, I sought more of a balance between the two. I think life is composed of lightness as much as darkness, but we tend to focus on one or the other at any given moment. There’s light to be found in loss, and darkness in love. My intention in this play is to demonstrate both without undervaluing either.

Kaplan: For this production, just to sit back and enjoy, and expose the material and production to as many people as possible. My director, the amazingly talented Playwrights Horizons fellow Dina Vovsi, has put together an equally amazingly talented cast and creative team. I’ve been away for the rehearsal period, so I’m going to see the whole play come together at once. That’s going to be intensely gratifying.

For the future of this play, more productions. It’s a big cast — seven speaking roles and the mother — making it a challenge to get produced in the current environment, which heavily favors small casts for practical reasons. I understand the practical side of theater, but I also think there is something lost when we limit our artistic vision for practical purposes. No matter how hard I tried, I could not think of telling this story without the core members of the family as well as their foils. So whoever takes this on will be managing a large cast, but they will be managing a cast in which everyone matters, no character is superfluous, everyone has a purpose, a reason for existing both on stage and off. I think (hope) there are companies and theaters out there that will see that, and make this play their own.

Kaplan: At the risk of over-beating this drum, I think (hope) the audience will react most positively to the lightness in a serious situation. Dying is about as serious as situations get — I remember reading once that all art is about love and death, and maybe not even love. I don’t see that as a depressing or sad statement. Art is a reflection of life, and life is driven, first and foremost, by a constant awareness of our own mortality. What saves me personally, and I think many others, from existential chaos, is finding the light in the darkness. I think that humor and lightness are underrated in its power to heal and sustain us. I think (hope) an audience will appreciate that power.

Kaplan: In terms of playwriting, I have a play in the pipeline titledÂ So Late, So Soon,Â a romantic comedy set in a nursing home to which the legendary Estelle Parsons is attached and which I am currently shopping around. We’ve had some strong interest in the play among actors, directors, and producers, and some terrific readings in NYC, I think that play has a bright future.Â So Late, So Soon, Visiting Hours,Â and a third play — a farce set in a funeral parlor titledHappy Endings — compose a trilogy of plays about aging, dying, and death. Sounds like heavy material, butÂ Visiting HoursÂ is the most “dramatic” of the three. I’m excited about all three of them for different reasons and hope they all find homes.

More immediately, in a few weeks, I will be entering USC as a first-year MFA Screenwriting student. I intend to focus on television writing, with a sub-focus in comedy. My mother and I didn’t have much in common, but we both loved television and theater, so in a way, my choices continue to honor our relationship, as complicated as it was. With one exception — these days I sit as close to the television as I damn well please.