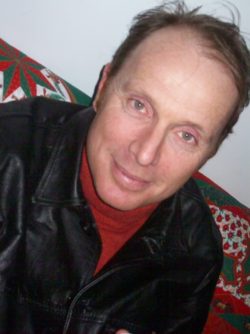 Kieran Carroll: Australia’s Oldest Man is a particular brand of curmudgeonly humour. This type of black and grotesque work can, for me, be traced back to Samuel Beckett, but it also has its roots in miserly 60s and 70s British comedy. Work like Morecombe and Wise and Steptoe and Son. I’ve used these inspirations and tried to insert an even more demanding and nastier twist on this with an Australian background.

Carroll: I wrote Australia’s Oldest Man in 2010, but didn’t do anything with it for a number of years. He was a character that came to me quickly but took some time to develop. Aside from that character, I tend to have two or three new plays in the pipeline at any one time. They’re always in very different states of development, and at some point, I have to shut down a couple and try to just focus on one.

Carroll: This is the 4th New York festival in under a year for Australia’s Oldest Man, and I believe New York audiences are enjoying and responding to the character’s eccentric, demanding and unapologetic ways. The direct address tactic of the piece is delightfully silly but plays off as terribly serious. Australia’s Oldest Man is 148 years old and he makes Donald Trump seem meek and mild!

Carroll: This is an exciting collaboration between myself and two New York based artists. Clara Pagone (director) and Timothy McCown Reynolds (actor) have done an incredible job with the work. I’ve learnt that it’s very important with a specific type of humour to be in sync with your collaborators, and to not force work on people, who although they may be talented, don’t quite come from the same place comically speaking.

Carroll: Fantastic to be part of something like this especially from so far away in Melbourne!

Carroll: To keep the play moving through America and hopefully also have some performances in England.

Carroll: The shock of his irascible nature, the loud and unerring opinions, the way that his long suffering wife finally attacks him.

Carroll: Beyond this project, I’m hoping that I can continue to collaborate with Clara and Timothy. I have a much longer one man show called The Youthful Adventures of Damon Dukirk. I’d like them to tackle that next. I’d like the chance to bring a longer work to the New York theatres.

About Patrick Hickey Jr. 12076 Articles
Patrick Hickey Jr. is the Founder, Editor-in-Chief, Master Jedi and Grand Pooh-bah of ReviewFix.com and is the author of the book, "The Minds Behind the Games: Interviews with Cult and Classic Video Game Developers," from leading academic and non-fiction publisher McFarland and Company. He is currently the Assistant Director of the Journalism Program at Kingsborough Community College and is a former News Editor at NBC Local Integrated Media and a National Video Games Writer at the late Examiner.com. He has also had articles and photos published in The New York Times, The New York Daily News, Complex and The Syracuse Post-Standard. Love him. Read him.