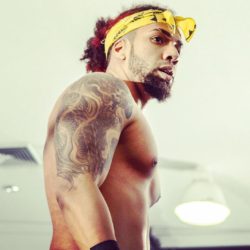 Review Fix chats with professional wrestler Sean Maluta who talks about his involvement in the WWE Cruiserweight Classic and working with Kota Ibushi. Malutta also shares his thoughts on the most influential cruiserweights in wrestling history and the impact they’ve had on his style in the ring, as well as his future.

A Staten Island-native, Maluta is the nephew of WWE Hall of Famer Afa and uses an awesome combination of strikes and technical maneuvers to wear down his opponents. Based out of the Florida WXW promotion, he’s a star in the making. If you missed his first round match with Japanese star Kota Ibushi, itâ€™s a must see a great example of what the young Maluta is capable of in the squared circle.