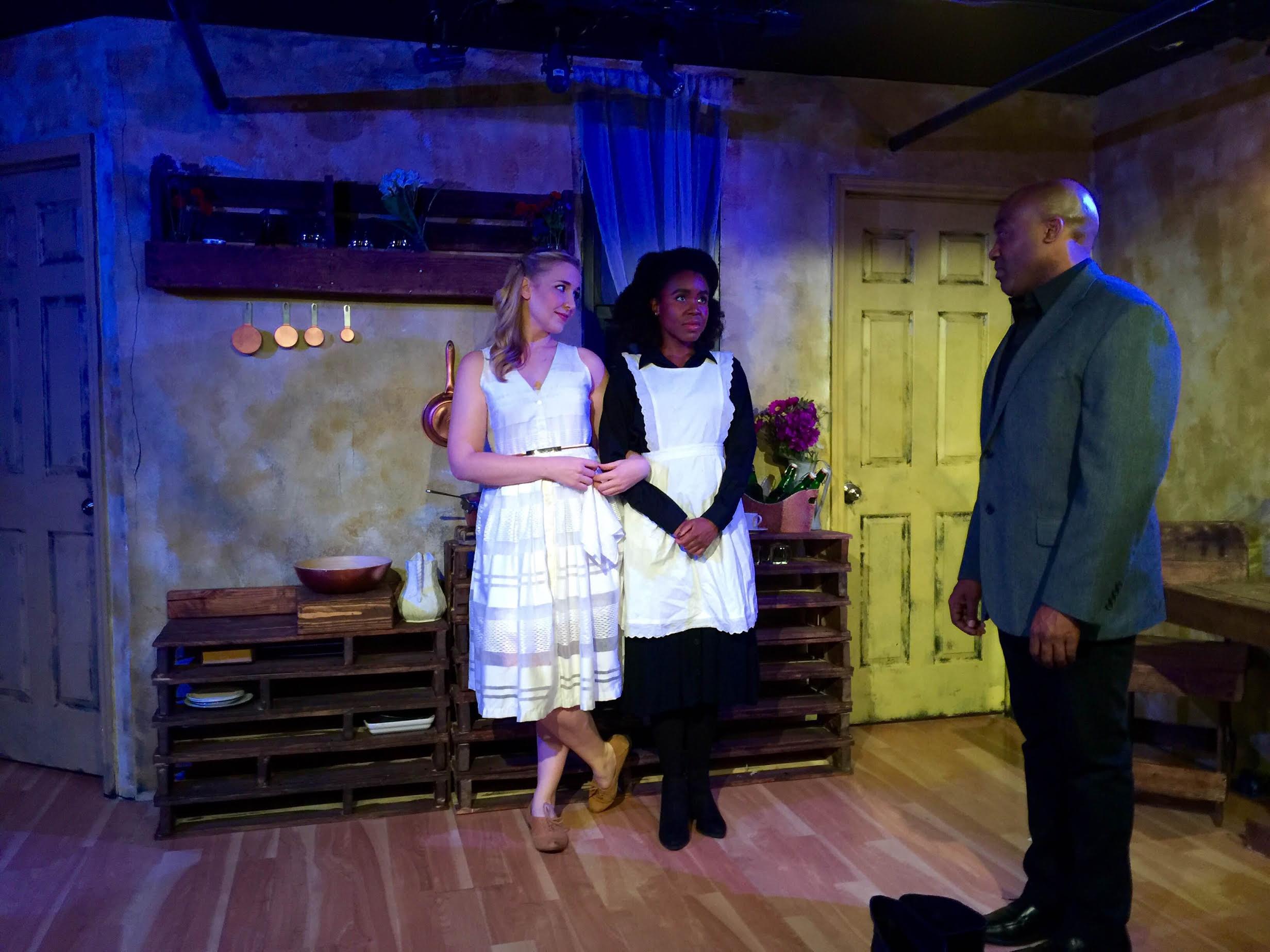 Transporting us from the stage of the Matthew Corozine Studio Theatre to 1888 Sweden, Director Gabby Aris introduces us to Craig Lucasâ€™ adaptation of August Strindberg’s Miss Julie, a drama, in which passions reach a boiling point on an already hot midsummer night. To a modern audience, the conflict taking place between the characters might seem trivial and exaggerated, but, if we consider the time and the difference in the characters’ social standing, everything falls into place. Thus, attending this tragedy, we have a chance to experience a reality that differs from ours, enjoy live cello music and passionate acting and let our imagination stretch beyond the limitations of the stage.

Taking place in the kitchen of a count’s mansion, Miss Julie has three characters: Miss Julie (Kalynn Dodge), the count’s daughter; Jean (Jamaal Clifton), the count’s valet, and Kristine (Kimberly Michelle Thomas), the count’s maid and cook. Their conversations raise a lot of important issues, such as one’s independence and freedom, social status and power, love and sex, and many others. For example, Miss Julie is a young woman, raised by her mother to be independent and to do everything a boy would do, so that she would never be a slave to a man. However, how free a noble woman, restricted by society and the notion of reputation, can be? Similarly, Jean, who is educated and well-spoken, cannot advance in life because he was born a peasant.

Focusing on the characters’ limitations, Aris chooses a suitable setting for the play’s content. On the one hand, it is a closed room that isolates the characters from the outside world. On the other hand, there are doors that open into other rooms whenever necessary, like opportunities to escape our circumstances, for better or worse. The room is decorated simply but tastefully. Wooden objects, such as massive doors and a sturdy dinner table, make us believe we see a house from the past. In addition, the countâ€™s boots that are always in front of us remind us of the owner of the house, whose presence we cannot ignore, even though he never appears in the play as a character.

Appealing to our eyes, the playâ€™s creative team also indulges our ears. Lovely cello music by David Gottfried precedes the play, sets up the mood for the audience and accompanies action. The choice of this string instrument is perfect because cello is beautiful and lyrical, but, at the same time, it stays in the background and does not take our attention away from what is happening on stage.

And indeed, a lot is happening, including but not limited to flirting, arguing, screaming and door-slamming. All of the actors do a good job putting feelings into words and facial expressions, which change from attraction to hate. The characters rarely just talk. Instead they either skillfully weave their words to compliment each other and achieve their goals, or yell at each other in anger. Hence, the play is quite loud, overall, which, like a soap opera, might entertain some audience members and annoy others.

Finally, the ending of Miss Julie is left open to interpretation, which is intriguing. Although we know the protagonistâ€™s intentions, we are left without a definite answer as to whether she follows through with her plan or not. Hence, we get to imagine our own ending, depending on where our sympathies lie.

Miss Julie is a play that different people might enjoy for different reasons. After all, it is a well-written and well-directed show, accompanied by live music, with beautiful (and at times also strong) language and no finality in conclusion. It also proves that old plays can be put on stage over and over again, and not only will they be different every time, they will also remain relevant and interesting for the audience, even if its members live in a totally different time under totally different circumstances.