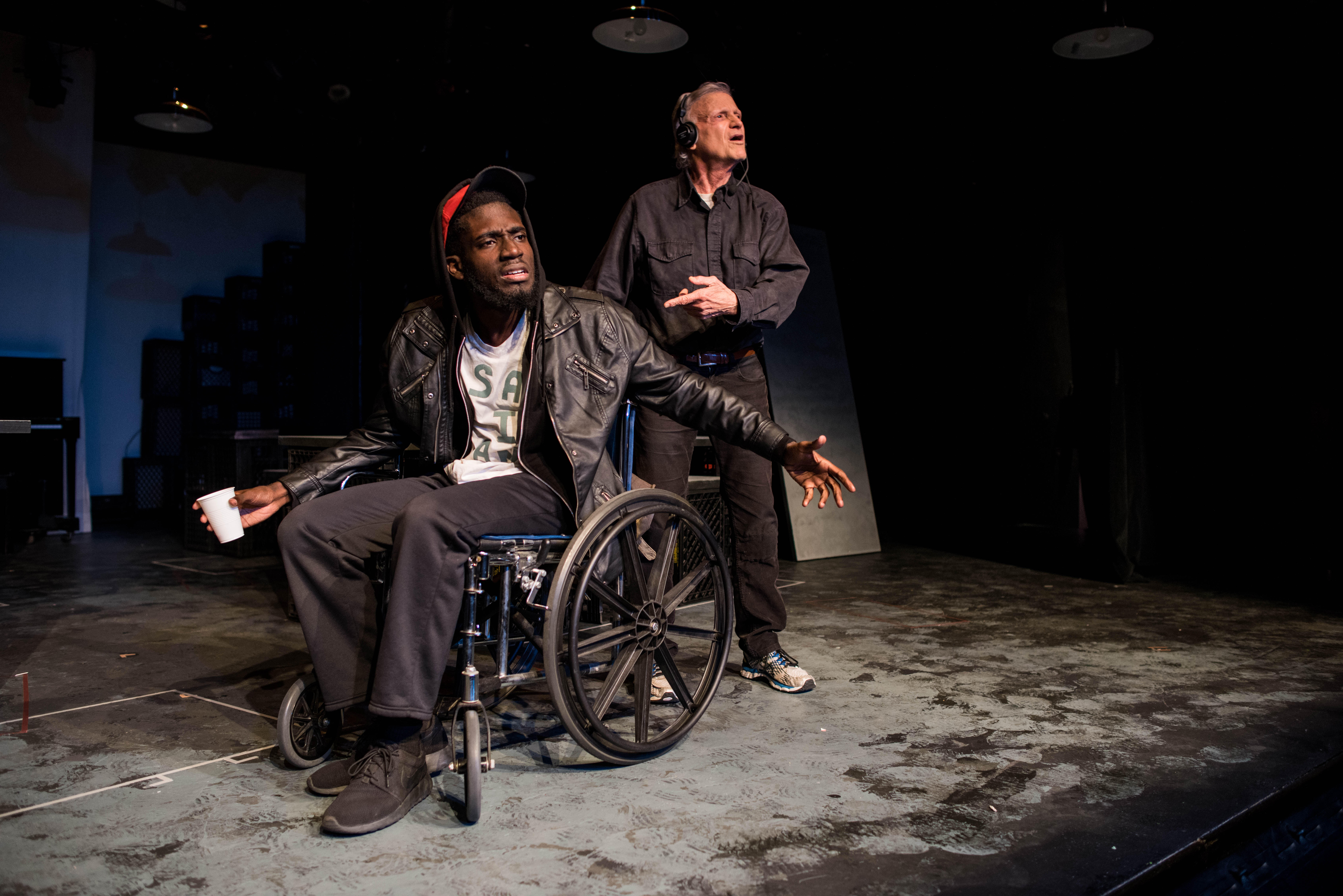 Encountering the homeless every day on the streets and in the subway of New York City, we rarely stop to give them change, let alone get to know them and their stories. Presenting her new play, “Roughly Speaking,” on the stage of Tada Theater, Shara Ashley Zeiger, who has been volunteering at Xavier Mission Welcome Table Soup Kitchen for over six years, allows us to hear their voices and get an insight into the circumstances that led them to homelessness. These are some of the stories Zeiger heard at the soup kitchen and while conducting interviews with the people who came there. Not only did she invest a lot of time into researching her subjects – the interview process took over two years – she also gave the play a lot of thought. Reminding the audience that no one is safe from becoming homeless, Zeiger’s characters differ in racial background, sexual orientation and social class. In addition, the play’s structure is carefully planned out, as one character, a rapper known as Lightning Bolt, controls the flow of the narrative and entertains the audience with his well-rhymed raps.

In other words, besides learning more about this underrepresented in literature and theater group of people, we also enjoy “Roughly Speaking,” directed by Celine Rosenthal, for its artistic value and keen sense of humor that brightens up the grimness of the topic. Plus, this play makes us think not only about the homeless, but also about life, humanity and the common along with the uncommon in one’s experiences.

Beginning the play with the scene in which Lightning Bolt (Steven J. Michel) in his wheelchair is being ushered out of the theater, Zeiger reminds us how the homeless are usually treated and erases “the fourth wall,” making us wonder for a second whether the play has started or not. Moreover, as we later understand, Lightning Bolt plays a very special role. Rapping while decorations are being changed, he serves as a narrator, which is unusual for theater, and also adds some spice to the action. Consequently, he interacts with the audience only and never appears among other characters. Though this seems strange at first, we understand and appreciate his role in the play as it unravels.

In contrast to Lightning Bolt, other characters never address the audience. They talk to each other instead. Portraying one day at the soup kitchen from opening to closing, Zeiger allows us to see what it’s like and to overhear a variety of stories. There’s a widow, Diana (Shara Ashley Zeiger), who became homeless after her husband died at a young age. Expecting to be a wife and mother, she never planned on working. In addition, she was so traumatized by her husband’s death that she turned to drugs to mute her pain and ended up on the street.

There’s a also doctor, Jose (Franz Jones), who could not take the stress associated with his job and attempted suicide. He’s happy to be homeless because he feels free. As he says, “Once I got evicted, I felt so much better. It’s like that thing that was hanging over me isn’t there no more.” His words make us rethink our idea of homelessness as a grim prospect.

Furthermore, there’s a couple of volunteers, Alicia (Madeline McCray) and Tiny (Danny Bolero), who met when they were homeless. Now they have jobs and live together in a small apartment, but still volunteer to help others. Hearing each unique and interesting story, we realize that the homeless are not just stuck living on the streets. They have their own goals and dreams. For some people, homelessness is a way of escaping their unhappy life, and for others it is a temporary struggle on the way to a better future.

In addition, we learn more about the characters from the way they talk. It is not unusual to hear such multitude of voices in such a diverse crowd. Still, we must commend the playwright, the director and the actors for letting us hear them. These voices paint a more vivid picture, telling us what the characters are like, where they come from and how educated they are.

Moreover, we get to hear what they are thinking. In the words of an old vet, Danny, “People don’t talk to me. They just ask if I need help. I still got two pieces of shrapnel in my back. They can’t get it out.” This loaded statement reminds us how shallow people can be when approaching the homeless, forgetting that they are human, that homelessness may not be the biggest issue in their lives.

Since the action takes place in the dining room, several conversations happen at the same time and lighting determines where our attention should be. During one scene, we hear two parallel conversations. The characters even use the same words. It’s an odd and confusing scene, but it shows that no matter how different our life circumstances are, we all go through the same motions. Like humanity, some experiences are universal, but we handle and process them differently.

Hence, â€œRoughly Speakingâ€ teaches us to listen and pay attention to the homeless instead of feeling bad for them as we are walking by. It reminds us that each of these people has a unique story, which is worth hearing. Ending the play with Lightning Bolt leaving the theater after completing his narrative, Zeiger closes this cycle. The play ends where it began. This story of one day at the soup kitchen is over, but there will be more days and more stories, which we can hear ourselves if we care to listen.