Review Fix chats with Darrin West, Co-Founder of Iocane Games, who discusses the development, creative process and goals for his current game on Steam, Beetle Uprising.

Darrin West: Franz and David and I have worked at a large number of different game companies over the years. We felt we could avoid many of the management problems weâ€™ve seen at previous studios. The 3 of us have worked on several commercial projects together and were looking for an opportunity to do so again. Franz and I were coming off the Rails and Riches project at about the same time that David was finishing a gig at Disney.

We wanted to design a game that could be built in about 6-8 months in a budget we could pay for out of savings. We donâ€™t have an artist on staff, so art was going to be a cash cost. We wanted something that was visually appealing, and showed off our technical abilities, maybe pushing the limits of Unity. But we kept the player in mind: it had to be fun for them. We considered a couple of other strategy games, but the estimated budget was too high. David had a genetics library we wanted to use and had written a number of custom shaders that allowed for procedural visuals based on genetics. We are bigs fans of Real Time Strategy, so the action gameplay became swarm-based RTS combat. 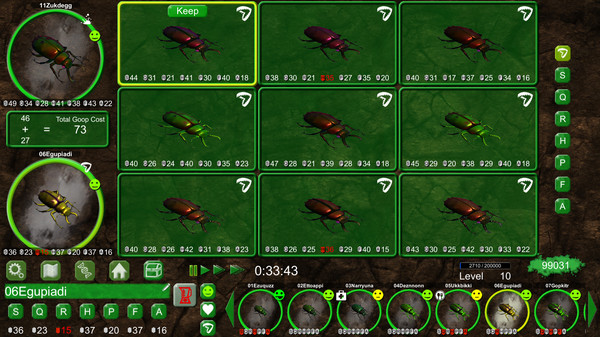 I guess you could say the game was conceived strategically (what can we do, how do we make it fun, will it be profitable?), as opposed to all passion (what do *we* love?). Once weâ€™d settled on a design, we wrote up a partnership agreement, created an LLC, and did all the other business set up.

West: Development happened primarily at Davidâ€™s house. We find that working next to each other is critical for motivation and efficiency. Itâ€™s pretty easy to get distracted by things at home without that kind of daily accountability. Nobody likes to commute, but the proximity effect made it worth it.

We like to keep the game running at all times, and move as quickly as possible to see things on the screen. We prototyped some parametric shaders to help decide what kind of art weâ€™d need. We investigated different kinds of 3d morphing. We tried a few approaches to the navigation of large numbers of entities.

We used a couple of different scrum or kanban approaches to managing tasks and spent a good bit of time decomposing the project and estimating. Deadlines and budget were always on our mind, so we kept an eye on dependencies and priorities.

We found a contract artist to model our Beetles and Enemies, animate them, and provide a number of textures. She was great to work with and had her own corporation, so that was easy on the taxes vs. an LLC or personal contract.

There was a natural split of work between David and me on the programming work. Franz worked on UI art, level design, and game design. And we all did lots of testing, roping with family and friends. We ran a few player tests and used our observations to redesign parts of the UI to make things easier on new players.

Overall, the excitement for building our own game from scratch, the accountability, and the real monetary skin in the game was highly motivating. We put in a lot of hours but were careful not to burn out.

West: We had a mascot. Oliver is a rescue that David and his wife have had for a number of years. He was always very insistent on being included in everything. Iâ€™m sure he lowered our stress levels.

We ate lunch at our desks, except on Fridays. Weâ€™d go to a restaurant and talk corporate issues, money, marketing, etc. There is a fantastic Indian place a few miles down the road that was in the rotation much more than any other place. Everything there was fantastic. Except for that one spicy okra incident.

West: This is the only game we know of that has so accurate a genetic simulation and lets you see those genes. It creates a unique challenge for a new player to understand recessive inheritance and learn breeding strategies to get the Stats they want.

The parametric shader and parametrically controlled morph targets let a player craft an almost infinite number of unique Beetles. Iâ€™m fascinated by the level of visual detail you can see when zoomed in on the Beetle Inspector.

The RTS combat uses rock-paper-scissors, where one attack type has an advantage over one other. This requires you to select your troops carefully, possibly even breeding specifically to overcome a combat mission challenge.

The behavior simulation in the Nest requires you to gather resources. So there is a different kind of strategy game loop required to breed beetles that are good at harvesting so that you can feed your collection and keep them happy enough to be useful in your other activities. It is a fun challenge to learn to juggle all those interconnected loops. If you are lazy and just fast forward to skip over something, that can cost you, since all your other Beetles are still consuming. There is a lot to learn about this game that may not be obvious on the surface.

Review Fix: How is this different from your previous games?

West: The big difference, is we built in and paid for it ourselves. So we get all the credit and all the blame. It has taught us more about making hard decisions.

Most of our recent commercial work has been on massively multiplayer online games. That is our deepest passion. We love the community, and to see them creating content and fun for one another. But MMOâ€™s are big. We need some smaller successes before moving on to that dream.

West: The Sims: the behavior simulation uses a needs-driven approach and per-object interactions much like The Sims.

Combat is a very simplified version of what youâ€™d see in Total Annihilation or Command and Conquer.

Franz could probably tell you where he got ideas for Tasks. I suspect it is a brand new creation of his.

West: Every decision is life or death. In a big studio, developers tend to think: Iâ€™m getting my paycheck; let me do my work the way I think is best. As an Indie you think: my friends are depending on this working; if Iâ€™m unsure of priorities or have an easy/hard option to choose from, Iâ€™ll discuss it. So much is riding on this. 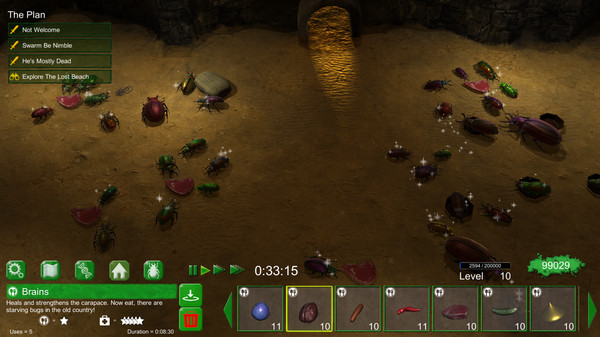 The other difference is similar: we do everything. We were on a short timeline. But didnâ€™t put in marketing effort right away (the visuals werenâ€™t finished; game systems werenâ€™t finished). We donâ€™t have a marketing department, so it was easy to say: Iâ€™ll just keep working, and we can start the marketing a little later. Big studios have whole teams dedicated to this. We had to stop and make a Trailer. We didnâ€™t stop to make a fancy website, or blog. Now we are catching up on that.

West: Most emotional: When a Head Crab jumped on me in the late 90s.

Most bittersweet: I cheated at Ultima on my Commodore 64 in the 80s using a disk editor on my save file. Woo! I have plate armor, and max hit points. Oh. Now I donâ€™t need to play anymore. Iâ€™ve ruined everything.

Feeling The Flow: Playing Empire on my brotherâ€™s Amiga in the 80â€™: noticing that it was 4 am, and taking one more turn anyway.

As a developer: seeing CCU numbers on games that Iâ€™ve built reach into the 10,000â€™s. Both the satisfaction that so many people loved my games. And the fear that Iâ€™ve forgotten something and might disappoint them.

Review Fix: How does this game disrupt the video game landscape?

West: I donâ€™t think it was our intention to change gaming as we know it with this game. It was intended to be a low budget indie title that proved we could publish a good game that entertained players.

West: Strategy gamers and Science nerds. There is a surprising amount of thinking needed to get the Beetles you want. And the work to achieve that is pretty satisfying. Players that understand and love genetics are getting a real kick out of it.

West: As being beautiful, deep, frantic, and a little funny.

West: We would like to see the uptake of the game sufficient to recoup our development costs, and allow us to add more content over the next year. Ideally, it would fund one of the other games we have cooking at the back of our minds.

West: There could easily be a sequel (new enemies, new missions), or a change of content, reusing the core gameplay. Like Plushies, or Gnomes.

We spend a good amount of time talking about our ultimate project: a kind of an online builder/survival game that taps into a lot of our history.

West: We were expecting Steam to perform differently when we started the project. A few years ago, an Indie title would be guaranteed a certain amount of exposure. Given the death of Greenlight and the upsurge of new titles, I think Valve is reserving impressions for more mainstream games. This is pretty hard on Indie developers and results in an evolution toward big studios and producers. We have seen a lot of Indie titles on mobile get lost, because of the rising cost of player acquisition. It seems to be happening for PC on Steam now as well. Still looking for ideas about how to address that.