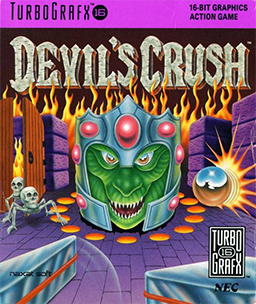 Even though its star has dimmed over the past decade and change, old-school enthusiasts will still find it a charming entry into the Virtual Console catalog. Gamers unfamiliar with both the game and console pinball games in general will also find it an entertaining tribute to a genre long forgotten.

While the gameplay is simple, as the game consists of just one three-tier table, the gameâ€™s difficulty makes up for its lack of depth and gives it the versatility needed to be truly enjoyable. However, despite the gameâ€™s solid difficulty, itâ€™s the core gameplay that will force gamers to come back for more.

You see, this isnâ€™t your normal pinball game.

The table for instance, consist of living things, ranging from sorcerers, demon birds, soldiers and a beautiful queen that ends up turning into something quite different. Throughout the game, youâ€™ll start to see things on the table change and thatâ€™s where most of the fun is had. Seeing the progression of the queen on the second tier is an experience no other pinball game has reproduced since and the gameâ€™s mini-bosses also add a luster and depth that sometimes make the game feel like something more than your average pinball experience.

As a matter of fact, after a few hours with it, youâ€™ll be positive it isnâ€™t.

However, it is far from perfect. For example, the gameâ€™s graphics and sound arenâ€™t on the same level as some of the other games released on the TurboGrafx-16 at the time. While the game does have its own sense of style and the graphics definitely capture the essence of a demonic pinball table, they are still a bit dark and muddy. The gameâ€™s sound is also slightly mediocre as the same track plays during the game, with another track playing during the mini-boss stages. Nevertheless, the gameâ€™s sound doesnâ€™t particularly take anything away from the solid overall package that is â€œDevilâ€™s Crush.â€

The gameâ€™s physics arenâ€™t exactly perfect either, as the pinball sometimes has a mind of its own, but considering how old the title is, itâ€™s to be expected. During the multi-ball parts of the game, gamers may get frustrated at times at how fast or slow the balls move. Nonetheless, you wonâ€™t have any problems big enough to take you away from the game.

With that being said, itâ€™s hard not to appreciate such a solid game that despite its weaknesses is still fairly enjoyable and challenging.

Anyone looking for something different on the Nintendo Wii Virtual Console can do a lot worse than â€œDevil Crush.â€