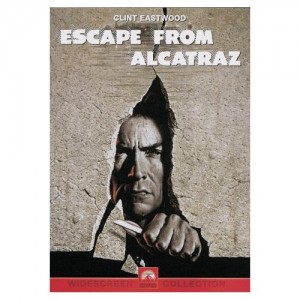 An original look inside the walls of one of the most famous prisons known as â€œThe Rock,â€ Don Siegelâ€™s â€œEscape from Alcatrazâ€ is an American classic.

To this day, life inside prison has never felt so real in a film. From beginning to end, camera shots zoom in on different areas of Alcatraz. The prison cells, cafeteria and even the yard all scream with the quiet intensity and adrenaline that human confinement produces.

â€œEscape from Alcatrazâ€ is a true story about a convict named Frank Morris, played by Clint Eastwood [Unforgiven, Gran Torino] who is sent to the prison and attempts to escape along with two other convicts, known as the Anglin Brothers, played by Fred Ward (Secret Admirer), and Jack Thibeau (Lethal Weapon). Â At the time, Alcatraz was notorious for being one of the toughest prisons to escape.

An intense nail-biter, this film has enough suspense to leave the viewer on the edge of their seat throughout. Morrisâ€™ showdown with Wolf, played by Bruce M. Fischer, a bully prisoner with a huge dislike for him is just one of those moments.

Posessing his trademark swagger throughout the film, Eastwood is at his best. If you could read his mind, it would say â€œget out of my way, punk,â€ in his low, but grizzly voice. His facial expressions are priceless, reminiscent of Paul Newman in â€œThe Hustler,â€ a man too that was calm, cool and collected, with an attitude that made you think that he wasn’t afraid of anyone who got in his way.

Go ahead, make his day. Wait, different movie, but still damn good in its own right.

However, in a move which bears resemblance to the antics of Eastwood in the “Dirty Harry” series, the risks he takes throughout the film will leaveÂ you shaky and constantly guessing his next move, a rarety in films nowadays that.

Siegel, who is also ironically known for directing the â€œDirty Harryâ€ films and working along Eastwood, did a great job of showing how Alcatraz looked from the inside as well as the outside, with slowly eroding paint chipping away and prison walls easily being broken. He brings you to the life of a prisoner through their day to day activities, from waking up in the morning, to working and spending their free time outside.

â€œEscape from Alcatrazâ€ also shares a parallel story to â€œShawshank Redemption,â€ because they both have a similar premise in that the main characters in each movie attempt to escape from prison.

Because of this, many who enjoyed Shawshank will quickly be at home at Alcatraz. Anyone elseÂ looking forÂ an intense heart pounding thrill for 112 minutes, need look no further.