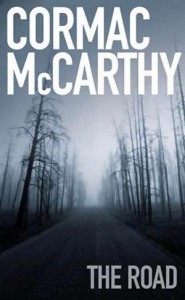 One of the most frightening aspects of Cormac McCarthyâ€™s “The Road” is that it could happen.

In a post-September 11th reality, the idea of the world being cannibalistic and predatory with nothing but fungi, disemboweled infants and a hapless dog is a plausible future. There seems to be nowhere to go. Everywhere is described as dark and cold. It is always raining and the only respite from this harsh reality (a bomb shelter that ironically remained untouched during the cataclysmic event) is too exposed to be enjoyed. Danger is everywhere and there is never enough food.

McCarthy makes you feel every wracking bloody cough the father makes. The boy is so thin and frail that you feel as if you can see right through him. â€œThe boyâ€™s candlecolored [sic] skin was all but translucent,â€ it says.

Yet McCarthy makes this boy the one who could keep humanity going.

Their journey to the coast, a possible place where life could be better has the foreseeable end of the father dying and the boy being left behind to keep the fire going. He is picked up by a small family.

McCarthy seems to leave a modicum of hope that ironically comes from the fatherâ€™s past. â€œYou could see them [the trout] standing in the amber current where the white edges of their fins wimpled softly in the flowâ€¦On their backs were vermiculate patterns that were maps of the world in its becoming,â€ it reads.

The fatherâ€™s world was vivid and full of color, purposeful life and language. The stories that the boy did not want to hear from his father because they did not belong to their present reality wonâ€™t be retold. Instead, they might actually be lived through the boy. Perhaps that is the fire that the father refers to.

It will be interesting to see what threads the film will pick from the novel. Will Australian director John Hilcoat (known for the horror film â€œGhost of the Civil Deadâ€ â€“ based on real life events in which inmates in a prison turn viciously violent after constant persecution) turn the Christ-like imagery of the boy in a dank alternative timeline on its head? The macabre undertones are certainly there for Hilcoat to draw from. After all it is a place where women are used as sources for food.

The casting also seems appropriate. Viggo Mortensonâ€™s chameleon-like acting ability is a no-brainer as the father. The son seems simultaneously apathetic and fretful. However, itâ€™s curious Charlize Theron that playing the mother. There is no question that the woman who played a characterized â€œMonsterâ€ has the acting chops, but the novel gives her such a minuscule role in this manly world. Perhaps it is because the mother represents more than common sense in the novel.

Yes, it is better to take your own life before the cannibals get you.

In reality, there is no hope. The boy will be lucky to make to adulthood. The family he meets at the end has nowhere to go and the dregs of a former humanity are everywhere.

However, it is possible that Hilcoat is expanding on a theme that McCarthy touched on, which is the importance of carrying on â€“ no, not a torch, but just to keep moving.

Things tend to die in McCarthyâ€™s world when they stand still, whether by design or unintentionally. That seems to be what this post-apocalyptic novel and film is about.

Is The Road worth your time? Yes. The straight-forward prose makes room for the reader to explore the idea of how to survive and cope. Perhaps not in a post-apocalyptic sphere, but in a place where we as individuals experience our own cataclysmic traumas that make it seem like the end of the world.