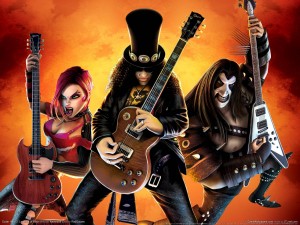 Guitar Hero 3 comes complete with a guitar for just 32 bucks on Amazon and is just 15 bucks as a stand alone game.

Over the past half decade, the â€œGuitar Heroâ€ franchise has become as evident in our societyâ€™s pop culture as the slinky and â€œSeinfeld.â€ However, this version of the game, despite new additions like boss battles that add to the fun, continues to provide a steep learning curve that may have finally reached its boiling point for casual gamers. The game is still undoubtedly the king of rhythm games; itâ€™s just so hard at times that the casual gamer will feel lost, rather than embraced.

Despite the gameâ€™s lack of accessibility to noobs though, this game is chockfull of the same goodness that made the first two cult classics. It also offers several new additions to the series that make it feel like anything but a sequel with an updated song list.

After developer Harmonix, the company that produced the first two games, went to work on EAâ€™s â€œRock Band,â€ Neversoft, developers of the Tony Hawk and Spiderman games, took the helm and have managed to recreate the great atmosphere in the series without a hitch. They even managed to add in a boss battles feature that allows gamers to play against Rage Against the Machineâ€™s Tom Morello and legendary guitarist Slash. Feeling something like Guitar Heroâ€™s answer to the mini-games in between fights in â€œMortal Kombat,â€ these boss battles give the gameplay a differentiation that the series just never had before.

Additionally, this version features more songs out of the box than ever before and offers a slew of downloadable content to keep the game fresh for as long as you want to play it. Making things even better is that there are only a handful of covers in the game, compared to the other games in the series that featured almost all cover material. Having the real artists perform these classics makes the game feel that more authentic and definitely lends itself to the greatness the game achieves.

Because of these new gameplay features and plethora of downloadable content, hardcore fans of the series will be extremely happy with the total package this game presents. However, to casual gamers, this may eventually be looked at as the apex of the franchise. Perhaps feeling the brand has to compete with â€œRock Band,â€ Neversoft has tweaked the gameâ€™s difficulty, attempting to give hardcore fans of the series what theyâ€™ve always wanted.

In the process though, it completely ostracized its casual gamer base, creating a title that past the easy difficulty setting, leaves them out in the cold. If you donâ€™t succumb to this notion, try this test. Let a newbie play the game on medium and measure their perspiration. Then do the same thing with the first or second game in the series. â€œGuitar Hero III: Legends of Rockâ€ is so tough that youâ€™ll turn into one of Pavlovâ€™s dogs every time you play the game, sweating through t-shirts after only a few chords.

For any veteran of the series, â€œGuitar Hero III: Legends of Rockâ€ is a worthwhile addition to your collection and is a worthy adversary in your attempt to become a rock god. However, if you are new to the series, you should either start back at the beginning or free up your schedule. Beating this game past the medium difficulty doesnâ€™t come without a ton of practice and frustration.