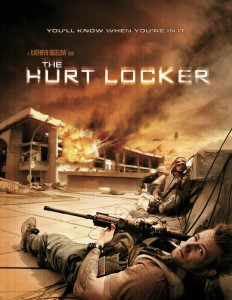 Itâ€™s not easy to say that â€œThe Hurt Lockerâ€ is a bad film, especially since there are so many things about it that are nearly perfect. Itâ€™s hard to remember another film about the war in Iraq thatâ€™s as absorbing and enlightening as this one is, and it explores material that lots of other war movies donâ€™t. It handles all of the action scenes with care and intelligence, taking the time to develop suspense before getting around to the payoff. As far as war movies go, you couldnâ€™t ask for much more.

All of that would be just fine if it had a passable hero, but itâ€™s hard to get behind the one in this movie, a hot-blooded staff sergeant whose name is William James (Jeremy Renner) â€“ he comes across as a selfish cowboy who throws caution to the wind. Thereâ€™s no question that his time in Iraq makes him a more mature person, and that being there makes him understand the value of life, but because heâ€™s bored with his duties as a father and husband at home, the film suggests that the life he wants is worth more than the one his son needs. For him, serving his country isnâ€™t a sacrifice, but an escape.

To his credit, though, heâ€™s pretty good at what he does. His job is to locate and defuse explosives hidden by Iraqis, and heâ€™s one of the few people in the Army with the training to do it. Although itâ€™s a job that requires improvisation and skill, James is so reckless that his survival sometimes comes down to dumb luck. That wouldnâ€™t be a problem if it were only his life on the line, but he repeatedly puts others in his unit at risk, which leads to some tension between him and Sgt. J.T. Sanborn (Anthony Mackie) â€“ after barely surviving one mission, he punches James in the face.

They eventually set aside their differences and learn to work together, and they come to respect each other more as time goes by. Even the civilians caught in the line of fire start to grow on James, especially a boy named Beckham (Christopher Sayegh), who makes a living selling bootleg DVDs on the street. Beckham says he plays soccer as well as the athlete heâ€™s named after, and he has an attitude that James can relate to. Itâ€™s understandable for a kid to have that kind of personality, but someone as old as James should learn to act his age.

Whether this movie supports the war in Iraq isnâ€™t an issue â€“ whatever your thoughts on the war might be, itâ€™s hard to deny that what the hero does isnâ€™t very admirable. On top of playing with peoplesâ€™ lives for the sake of an adrenaline rush, the most bothersome thing about James is how irresponsible he is, especially when it comes to the family he leaves behind. Although there are lots of people who leave their families to go to war, itâ€™s hard to imagine them seeing their loved ones the way James sees his.

Maybe heâ€™s not the kind of guy who can handle fatherhood, but as the great philosopher Michael Jackson once advised, â€œIf you canâ€™t feed your baby, then donâ€™t have a baby.â€ Yeah, yeah.