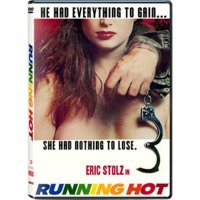 “Running Hot” is the low budget distant cousin toÂ moviesÂ such as “Badlands” and “True Romance.â€ While not as rewarding an experience as the two aforementioned titles, it’s still a film worth watching.

The problem with small pictures like this one is that no one has an interest in seeing a premise that is has been done so many times before. However, it it is the little nuances of a small picture that give it the edge over the better flicks and make for a terrific and fast-paced B-movie.

DannyÂ Hicks, (played by Eric Stolz, “Mask”, “Caprica”) is wrongfully accused of killing his father and is on death row. During that time, he has been receiving love letters from a heavily deluded prostitute named CharleneÂ Andrews, (played by Monica Carrico, “Guilty by Suspicion”). Eventually, Hicks manages to escape from prison and arrives on Andrews doorstep in need of help. To her, this is a dream come true and a chance for her to start a new life.

She’s not the sharpest tool in the shed.

Stolz andÂ Carrico do a fantastic job, considering these were leading roles for the two actors in the beginning of their careers. Despite the fact Stolz can’t compare to Martin Sheen in “Badlands,â€ it’s still one of his better performances.

The script paints the portrait of these two bleak and unredeemable characters. Despite this, they don’t have a strong grip on reality.Â The film takes its time revealing that to the audience. At that point however, we are already along for the ride before that fact sinks in.

In order to enjoy the picture, you have to overlook the major character flaw of Andrews, falling for a prisoner she never met or knows outside of the what is on the news.

However, this isÂ a small nuance and original touch toÂ “Running Hot.â€

TheÂ movie allowed character actorÂ Stuart Margolin, (“Death Wish”) a chance to shine as the officer out to catch Hicks. He ends up as one of the meanest cops on screen.

Directed with a fast-paced flair from Mark Griffiths, (“Hardbodies”, “Hardbodies 2”) the film flies past you. It becomes an enduring journey with two characters you normally wouldn’t spend time with.

On top of that, Griffiths’ able directions also fills the picture with some insightful viewpoints into the character of Hicks, while never slowing the momentum of it all.

Code Red, did a wonderful job on the transfer of this 1984 picture. Along with that they got Griffiths to record a commentary and an on-screen interview, which sheds some light on the making of it.

An extensive still gallery and Alternate title track complement the film quite nicely.

Sadly, no trailer or B-movie gallery of other Code Red titles are present on the disc, which is always a welcomed treat on their other DVDs.

Nevertheless, while the movie is far from a masterpiece, it’s still a fun ride that is worth a look for Stolz’s fans who want to see how much he’s developed as an actor over the past 25 years.