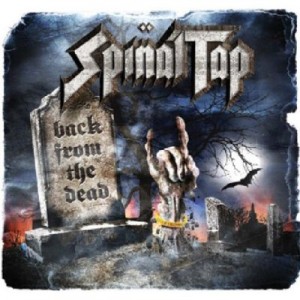 The greatest band that never existed has returned.

After 25 years since the release of Rob Reinerâ€™s smash hit mockumentary â€œThis is Spinal Tap,â€ Nigel Tufnel, Derek Smalls and David St. Hubbins have decided to get back together one last time and release their third real album â€œBack from the Dead.â€

It does not disappoint. As a matter of fact, it may be one of the funniest albums ever recorded. While most of the songs are redone versions of those featured in the movie that birthed the band, six new songs have been recorded with the same hilarious material and spoofs that we all love.

The album opens up with the all time classic â€œTonight Iâ€™m Gonna Rock It.â€ True fans of the Tap will notice the new solo from Tufnel and the extra backing vocals by St. Hubbins and Smalls. It then cuts to the first new song, which happens to be the title track.

â€œBack from the Deadâ€ starts out with the hilarious line â€œGive me reincarnation or give me death.â€ And then hits you with guitar riffs and synthesizers, producing hilarious results.

Among the perks of the album is the packaging. The CD case transforms into a diorama of the Tap, playing a show to a legion of fans â€“ Stonehenge included.

It also includes an hour-long DVD of the band members doing a track-by track commentary. It isnâ€™t necessary, but itâ€™s mildly entertaining and a nice added bonus.

One of the many humorous moments of the album is the three â€œJazz Odysseyâ€ songs. They are done in pure homage to the movie and make for a great inside joke for people who have seen it.

â€œFanâ€ favorites like â€œBig Bottom,â€ â€œHellholeâ€ and â€œStonehengeâ€ are also featured on the album and are as funny as ever. By the time you get to them your guts will already be on the floor from how hard youâ€™ve been laughing.

Other new songs include the jaw-droppingly funny â€œWarmer than Hell,â€ which is funnier than a Simpson’s Marathon.

â€œCeltic Bluesâ€ puts you back in the movie for a brief period.Â Itâ€™s hilarious as it makes no sense and is full of classic â€œTapâ€ moments such as the small argument at the end about whether they should keep the track or not.

The only remotely serious sounding track features numerous guest appearances. â€œShort and Sweetâ€ is not much of the former, ranging to six and a half minutes long but is indeed the latter. â€œSolos galoreâ€ is all to be said from the likes of Stevie Vai, Phil Collen, Keith Emerson and John Mayer.Â It is indeed a keeper and the best song on the album, instrumentally speaking. Steve Vai and John Mayer belt out incredible solos with their signature scales and tones.

The album ends with â€œCups and Cakes.â€ This song is by far one of the funniest songs on the album and makes you want to cry. The lyrics are funnier than anything Stephen Lynch could come up with on a good day.

Whatever happened to that guy anyway?

â€œBack from the Deadâ€ is easily the best way to thank everyone for watching the movie, no matter your age. It pays a heart-warming tribute to all the people who watched a joke get taken too far and fall in love with the idea. â€œBack from the Deadâ€ is well worth the money and turns your laugh meter well past 11. It will make you laugh, but more importantly, itâ€™s going to rock you tonight.