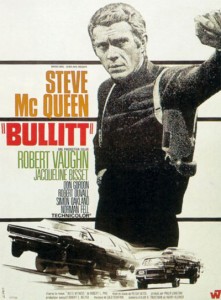 Like a lit fuse, â€œBullittâ€ is a ticking time bomb ready to explode, leaving your heart pounding and your adrenaline hastening.

There are films that attract interest from the get go, leaving you on the edge of your seat.Â  This may be the case in â€œBullittâ€ because the setting of the film takes you on a journey that leaves you with an attraction, which separates you from reality, causing you to get sucked right into the world of the film.

Featuring an intense plot, a durable character and a remarkable setting, â€œBullittâ€ has the main ingredients of an all-time action classic.

Steve McQueen [The Getaway, The Great Escape] stars as Frank Bullitt, a tough San Francisco detective in one of his most famous and memorable roles.Â Bullitt has received an assignment to keep a star witness mob informant, Johnny Ross, played by Pat Renella [Moon Child, Beverly Hills Brats] out of sight and danger for 48 hours.Â Ross is scheduled to testify against his mob associates before a Senate subcommittee in San Francisco. Ross then is to be delivered to the courtroom.Â However, before the night is out, a pair of hitmen ambushes their location, leaving Ross dying of shotgun wounds and forcing Bullitt to seek revenge.Â He intends to go all out and put everything on the line, including his job, by finding the gunmen and the mysterious underworld kingpin who hired them.

McQueen shows a tough, calm and cool demeanor throughout the film.Â His attitude is relentless and he gives a riveting performance like no other.

Attitude is a key factor that Bullitt displays, causing him to keep going and not stopping until he seeks justice.Â If there was a main character in a film that you would want to crack a case, this is your guy, because he will stop at nothing until he finishes the job.

â€œBullittâ€ is also known for one of the most intense and memorable car chase scenes to ever be viewed in a film.Â For about 15 minutes, your eyes are glued to the screen, as you experience a rush like no other.Â From the famous street hills of San Francisco, director Peter Yates [The Deep, Breaking Away] brings you as close to the action as you can get, making you feel like you are riding along with Bullitt in his Mustang GT.Â The different camera angles zoom in and out on Bullitt as he is driving, while the various landmarks add an authentic touch, making you feel as though you are there in person.

Again, the action this film has is amazing and leaves the viewer breathless and fulfilled.Â McQueen displays his tough charm as an actor, causing an attraction that the viewer will never forget. If you crave speed and an adrenaline rush, this film is the dose to your addiction to pure action.

Faster than a speeding bullet â€“ no itâ€™s not Superman. It’s Frank Bullitt- heâ€™s out to save the day.