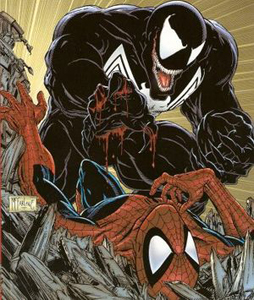 Everyone loves that black suit.

But no one expected that it would result in the birth of one of Spidey’s deadliest villains.

However, it may be a bit of a drag for other readers until the last 75 pages or so, when the story and art deviates from tradition and becomes as revolutionary as the character it ended up creating.

After the Secret Wars, Spider-Man came back to his apartment in Chelsea with some new digs, and comic-book fans all over the world ate it up. After a while, though, the suit ended up causing more pain for the web-slinger than anything else. Being able to go back and see the writing and art of people who told this story â€“ legends like John Byrne, Louise Simonson, David Michelinie, Mike Zeck, Ron Frenz, Rick Leonardi and Greg LaRocque â€“ is a blast, but it’s a different one. Compared to the work now on shelves, the writing and art in the first two-thirds of the book is tremendously dated. Due to the comic-book code authority, these stories lack the flavor of what the industry has produced over the last 15 years.

Nonetheless, it’s a fun and nostalgic ride through Spider-Man’s dealings with the symbiote costume.

Newer comic book geeks know Todd McFarlane as the creator of â€œSpawn,â€ but the crafty Canadian made a name for himself in the ’80s drawing for both DC and Marvel, spending time on both the Batman and Incredible Hulk series before eventually hitting the Spider-Man series and becoming the household name he now is.

Without the industry-changing visuals he produced in the late ’80s and early ’90s on Spider-Man, it’s possible that McFarlane’s rise to fame would have taken a little longer than it did otherwise. Completely transcending the industry by erasing the boundaries many comic-book artists forced themselves to follow, McFarlane has influenced countless other artists and, as a result, pushed the level of art present in comic books to much higher levels, thus making for an engaging reading experience.

Make no mistake, the art in this book done by McFarlane is a feast for the eyes and guides the stories in a way that every comic-book artist has tried to imitate since. Not only does he draw an incredibly sexy Mary-Jane Watson, but his Eddie Brock/Venom work is still the best to date. However, the best part of McFarlane’s work are the signature full-page Spidey drawings.

Easily lighting up the book, McFarlane’s work in the end becomes the main reason to purchase the compilation.

Nevertheless, it would be foolhardy to forget about all the history that encompasses this collection, as the lore presented inside it has induced dreams in millions of hearts and will continue to for years to come.

Corniness can always be forgiven, especially when it’s not done on purpose. Time does strange things to art and when the medium is supposed to reflect the time it was written in, forgiveness should always be allowed.

Because of that, this a collection every fan of the series will enjoy and an even better one for newer comic book fans who want to be introduced to one of the most intriguing comic book battles of all time.