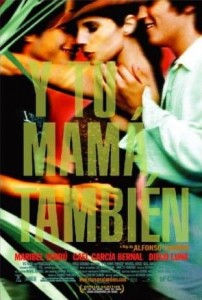 When you are young and restless, do you think about life, friendship, relationships, politics and social status in deeper, more sophisticated terms? Or are you perceiving everything through the shallowness and artificiality of the unrealistic and short-lived Hollywood-type comedies that offer instant get-rich-quick and happily-ever-after recipes? Oscar-nominated director Alfonso Cuaron (“Children of Men”) gives thoughtful answers to the aforementioned questions, and once again proves that he’s a worthy member of the prominent Mexican filmmaker trio (alongside Alejandro Gonzalez Inarritu and Guillermo del Toro) in his coming-of-age drama “Y tu mama tambien” (“And Your Mother, Too”).

Even though Tenoch comes from the privileged family of high-ranking political officials and has the luxury of living in a suburban house with a swimming pool and a nanny, while Julio leads a much humbler existence as the son of a secretary with leftist ideas and lives in a crowded tenement in the outskirts of the city, the two boys are best friends. Yet their friendship is based on the common desire of masturbating under the sun while fantasizing about Salma Hayek, having sex with their girlfriends behind their parents’ backs, getting drunk and partying all night long. In short, they fail to understand the deeper meaning of life.

The party seems never-ending until they get acquainted with the charming older Spaniard named Luisa Cortes (Maribel Verdu) at a wedding. As the wife of Tenoch’s cousin, a creative-writing professor named Jano, Luisa seems like a very simple woman at first (all she has is a dental hygienist’s certificate), yet she has much more intuition in things in life, and she is the one to help the two boys mature. As a matter of fact, after the threesome’s improvised trip to a mysterious beach resort, “La boca del cielo” (“Heaven’s Mouth”), the lives of Tenoch and Julio is never the same. The name of this destination is symbolical, for this is the place where the cancer-stricken Luis departs from this world, and probably goes to heaven.

Both Diego Luna and Gael Garcia Bernal extend their real-life friendship into a perfect onscreen chemistry. Even though the half-British Luna hasn’t gotten far with supporting roles in Hollywood movies such as “The Terminal” and “Milk,” he proves he deserves more attention when portraying the spoiled Tenoch. He manages to induce the believability of his character in the scenes when he uses his leg to flush the toilet in Julio’s bathroom, and when he enters Luisa’s room to ask for shampoo (again, a pretext for having sex).

Garcia Bernal doesn’t yield to Luna’s acting, either; despite the fact that the character of Julio is quite younger than the actor (Bernal was 23 at the time of the shooting), few viewers would be able to tell. Garcia Bernal’s character from “Y tu mama tambien” seems much younger, more vulnerable and more immature than his character from “Amores Perros,” which was filmed in 2000 – one year before “Y tu mama tambien.” Once again, he shows that he tends to have great chemistry with the famous Mexican filmmakers.

The Spanish actress Maribel Verdu’s performance is breathtaking and eye-watering. Even though she is relatively unknown to the average American audience, Verdu is a holder of the Goya Award for best lead (the Spanish equivalent of an Oscar) for her role in “Siete mesas de billar frances.”

Indeed, she is very persuasive when leaving farewell messages on her unfaithful husband’s phone, as well as when she gets the two friends drunk, talks dirty with them and, subsequently, turning them onto the idea of having sex with one another (the pivotal point in their friendship).

The rhythmic voice over of the narrator (Daniel Gimenez Cacho “El callejon de los milagros”), on the other hand, provides a lot of information, as well as deeper analysis and interpretation of the characters’ actions. The narrator’s omniscience, alongside the juxtaposition with the scenes, contributes to the inner depth of the feature.

“Y tu mama tambien” has the unique ability of simultaneously being entertaining and thought-provoking.

Review Fix breaks down the entire Summerslam card and picks winners for each bout. Continue reading to find out who...