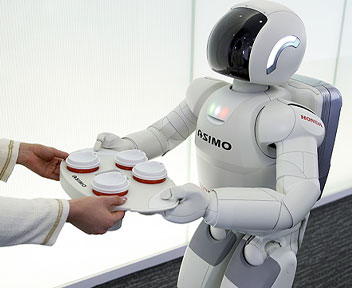 Hondaâ€™s short film, “Life with Robots,” which appeared at this year’s Sundance Film Festival, puts the reality of robotics into perspective. They make it quite obvious that the folks in the robotics department of their company are “terminator” haters. With that being said, the uncovering of the difference between science-fiction and science-fact are the premise for this cinematic unveiling of Asimo.

In the eyes of the Honda scientists, making a humanistic style robot that can walk on two legs is difficult enough without John Q. Public believing that it will soon take their jobs away and eventually rule the world. This flick is to promote Asimo and robotics as a testament to the wondrous things that the human species can accomplish, not the other way around.

In a sense, Honda is clearing the air by promoting the fact that cars and motorcycles are only a fraction of what mobility includes. The robotic repertoire includes medical components that are now used in heart surgeries that make the process faster and more accurate, assembly lines, anti-lock brakes, search and rescue equipment and even some everyday household items.

The only negative about this extraordinary introduction of a lifelike mechanical moon man is how the average person is perceived as an imbecile who has nightmares of Arnold Schwarzenegger. The phrase goes, â€œNever underestimate the stupidity of the majority,â€ but not only are they bringing this video out in the hopes of gaining investors, but to also regain the multitudeâ€™s interest in robots. Itâ€™s having the opposite effect.

All of the slander about the misconception that robots are evil is a turnoff to anybody with half a brain. There is entirely too much speculation that the average person has phobias for Asimo and its counterparts. Rather than waste time explaining why a robot won’t haunt our dreams, a further detail of Asimoâ€™s skills and its potential for future coexistence with the human species would have done better.

Honda truly believes that the reason why peopleâ€™s interest of machines faded is due to a fear of androids. If people really were afraid of cyborgs, then the “Terminator” saga wouldnâ€™t have produced blockbuster hits in the first place. This video lost its luster by featuring the scientists and not their creation.