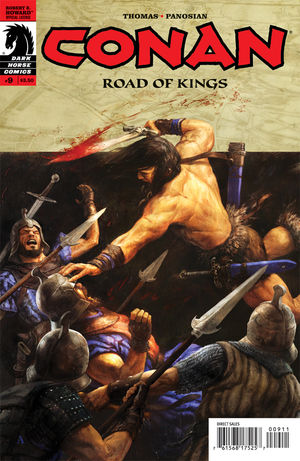 Conan the Cimmerian is about as iconic as you can get. Starting from the written work of Robert E. Howard, then moving on to film and through the amazing artwork of Frank Frazetta, there can be no mistake that Conan is popular. With a built-in name and recognizable storylines how can anyone breathe fresh air into a character that has been around for over half a century?

Reading issue 9 of Conan: Road of Kings will remove doubt that there is room for swords and sorcery in the comic book world. â€œWhen Death Takes Wingâ€ takes place after a plot has been found out to overthrow the king. Barely escaping a marauding crowd Conan finds himself confronted with well-fed insects and the undead. With a child, her mother and a useless prince by his side, Conan has Prospero and Jâ€™honn, the only two other men competent with a sword to help stem off the oncoming tide of zombies.

You would think that there would be panel after panel of action, but instead you get witty banter between Jâ€™honn, a priest who equates religion with magic. Itâ€™s the perfect place for a conversation that is seemingly absurd and simultaneously thought provoking. Still this is Conan and clever inferences on war and religion give way to battle scenes and a mother fiercely protecting her daughter.

There is a way to fight the monsters, but leave it to a coward to find a way to make things worse. Besieged by all sides you may think that this is the end for Conan, but leave it to Roy Thomas to figure out a plausible way to get out of an impossible situation.

For Conan, his journey onto the road of kings will once again be thwarted. What will keep you reaching for the next issue will be how he keeps his promise to a child. What will intrigue even more is the cover for issue 10. With a beautiful gorgon placed behind a golden haired man on a throne what could possibly go wrong?