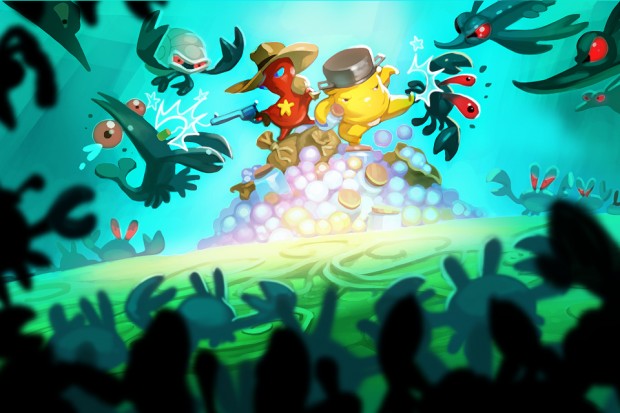 PARIS – October 11, 2011 – The Game Bakers, an independent video game studio founded by industry veterans, is pleased to announce the release of their debut game, SQUIDS. Now available for iPhone and iPod touch, SQUIDS sells for $0.99 on the App Store: http://itunes.apple.com/app/squids/id467904350

Developed by a team that has years of experience working on AAA console games, SQUIDS combines RPG elements and tactical gameplay with convenient touch controls, gorgeous graphics, and an epic adventure storyline. An infectious black ooze is threatening the Squids’ lush underwater world, turning ordinary crustaceans into dangerous monsters. Now it’s up to a ragtag team of Squid heroes to fend off the corrupted hordes and protect their peaceful homeland from certain destruction.

The game’s heroes may be stretchy and springy, cute and colorful, but there’s also plenty of gameplay behind this fun facade. Choose your heroes among four classes, each with unique abilities and attacks, to build the perfect party. Then lead your team into turn-based battles against the infected crabs and shrimp. Use each Squid’s strengths, the environment, and enemies’ weaknesses to devise strategic attacks. Level up your Squids and customize your party with skill-boosting helmets. The game’s touch controls are easy to master: simply grab a Squid by the tentacles and fling it across the battlefield.

“After years of working on best-selling console games, we formed our own studio so we could bring our expertise of AAA games development to iPhone gaming and make the best of the two worlds meet,” says Emeric Thoa, The Game Bakers’ CCO and co-founder. “SQUIDS has the depth hardcore gamers are looking for, along with the accessibility casual gamers expect on the iPhone or iPod touch. From the funny characters to the adventurous story to all of the tactical possibilities, SQUIDS offers something for all types of players.”

SQUIDS is also coming soon to iPad (HD), Android, PC, and Mac. To learn more about SQUIDS, visit the website at http://squidsthegame.com or Facebook at http://www.facebook.com/SquidsTheGame.

About The Game Bakers
The Game Bakers is an independent video game studio based in Paris and Montpellier, France. Founded and staffed by industry veterans whose credits include numerous AAA console games, The Game Bakers focuses on creative projects that combine traditional gaming values with the emerging opportunities afforded by touch devices and the exploding mobile market. Their first game, SQUIDS, is available now for iPhone and iPod touch, and coming soon to iPad, Android, PC, and Mac. To learn more, visit the company’s website at http://thegamebakers.com. The Game Bakers are also on Facebook (http://www.facebook.com/thegamebakers) and Twitter (http://twitter.com/thegamebakers).