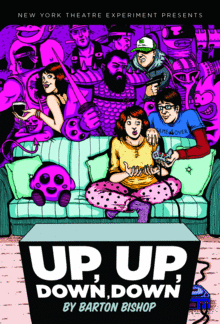 Often times, the small stages get forgotten, but not here. And with Broadway tickets continuing to rise, the Off-Broadway and Off-Off Broadway scenes have never been brighter. But what shows stood out the most? In this exclusive list, Review Fix counts down our picks for the top 10 Off/Off-Off Broadway Productions this year.

10: Guys and Dolls: Powered by an amazing performance from the productionâ€™s four stars and a stellar supporting cast, the Genesis Repertoryâ€™s run of â€œGuys and Dollsâ€ proved that this company is deadly serious about bringing high quality theatre to the Brooklyn area.

Funny, charming and performed with precision, youâ€™ll completely forget that the play takes place in a makeshift childrenâ€™s auditorium at the Block Institute in Brooklyn. Fueled by the excellent live musical performances of Eric K. Johnston and his band, the production had a huge feel, in spite of a smaller cast and less attention paid to the set.

At its heart, â€œGuys and Dollsâ€ is all about four people, in four completely different places, that ultimately need and deserve love much more than they thought. Regardless of the lack of spectacle, Michaels and company piece together a production brimming with emotion that does nothing short of induce laughs and smiles throughout, with no bumps, calluses or bruises along the way.

9: Wanderlust: Add great music together with energetic dance and a dash of David Bowie and put it in the Robert Moss Theater for the Planet Connections festivity and you have Leslie Guytonâ€™s new production, â€œWanderlust.â€Â Fueled by stellar performances cast-wide, itâ€™s a fun and engaging story of life and love.

While itâ€™s more of an experimental piece with the narrator (Colin Summers, who also sings and plays guitar during the performance) telling a heady, yet fun story of self-discovery, the average theater-goer will definitely find something to love here.

Simply put, the â€œband,â€ Cydney McQuillian-Grace (vocals), Summers, Thomas Murphy (piano), Chris Coluzzi (drums) and Josh Henderson (electric violin) are excellent. Grace has a voice that will remind many of Jewel, while Summers makes you think of Bowie and Lou Reed. Henderson stands out with booming violin work, while Coluzzi and Murphy fill out the sound nicely. The end result is a small band with a big sound.

8: Hold: In just 25 minutes, Ruben Carbajalâ€™s â€œHoldâ€ is able to make you laugh and think about your life. Itâ€™s ultimately quite an endeavor, considering thereâ€™s only one actor on stage and no scenery in the production. A dark comedy that has a man [James Lentini] on the phone with a suicide prevention hotline that ultimately morphs into a closer dissection of his life, â€œHoldâ€ is entertaining from start to finish. Itâ€™s almost sad when it comes to an end, considering Lentiniâ€™s solid performance.

7: Guts: At first glance, GUTS, a new one-woman show currently running five nights a week through November 20 at The 9th Space in the East Village, appears to be of interest only to a particular audience: women. Upon closer inspection, however, GUTS isnâ€™t as one-dimensional as it may initially appear to be. Intentionally or not, the emotional and spiritual journey experienced by the main character (based on the life of Liat Ron, the writer and star of the play) will resonate not only with women of all ages and denominations, but even with men who may be empathetic to the difficulties of living in an increasingly shallow and demanding society.

6: Hush: A lively musical with a positive message, â€œHush,â€ which is based on an Italian play by Etta Cascini, sounds like a buoyant chord of the first annual Midwinter Madness Short Play Festival. As the play is a mix of a musical, a comedy and a regular performance, it is hard to determine which part of it to appreciate the most. Perhaps, thatâ€™s why â€œHushâ€ makes such a good impression on the audience: it has more than one dimension, and it is wholesome with all of them united.

5: The Shoemaker: Even if youâ€™ve seen Danny Aiello on the big screen before, youâ€™ve never seen him quite like this.Â The Hollywood veteran stars in Susan Charlotteâ€™s â€œThe Shoemaker,â€ a play full of entertainment, from start to finish. Throughout the performance, Aiello displays his talent with both his bursts of anger and charismatic personality. Ultimately, his charm and wit is what puts this play over the top. In the end, itâ€™s a great success.

4: Mopoholic: A true to life one-woman show based on her love and friendships with over 30 mops and the effect theyâ€™ve had on her, Susan-Kate Heaneyâ€™s show is 100 percent original. Well-written and pop-culturally sound [the Boyz II Men and Little Mermaid segments are both hilarious], there isnâ€™t another show like this in New York City. It manages to be consistently wacky, yet remarkably heartfelt- a coming of age story that delivers in ways that you donâ€™t expect it to.

3: Heâ€™s Not Himself: Gershwin meets noir in a comedy musical highlighted by five talented young actors.Â Thatâ€™s essentially the skinny on Marc Silverbergâ€™s â€œHeâ€™s Not Himself,â€ a story that by its end, is definitely a kick in the head. Or maybe a punch, slap, or trip that lands you on it.

Always delightful, this musical, which is currently showing at the Planet Connections Theatre Festivity, has it all, from tunes that will take you back to great films of the black and white era, to a â€œScooby Dooâ€ chase scene during the second act thatâ€™ll leave you in stitches. Throughout the performance, the young cast shows remarkable poise and comfort on stage. As a result, thereâ€™s never a dull moment.

However, those worries are quickly put to rest in what ultimately becomes a hysterical evening that you wonâ€™t soon forget. Lovable and incredibly quick-witted Jeff Rogers, the MC for the night, tells the audience several times to keep drinking because it makes the show even funnier, but in all honesty, even the most straight-laced, rigid and boring person will find something to laugh at during the show.

Simply put, every member of the cast is extremely talented, which makes it impossible to pick a favorite by the end of the two-hour show. The fact that all the comedy is improvisational and completely made up on the spot makes everyone associated with this performance something special.

1: Up, Up, Down, Down: The set design in Barton Bishopâ€™s â€œUp, Up, Down, Downâ€ is so surreptitiously awesome that when you first walk into the Access Theater on the fourth floor of 380 Broadway, you feel like youâ€™re at someoneâ€™s home and not a theatrical performance. However, as the play goes on, you see how integral the scenery is to the performance.Â Eventually, the set design isnâ€™t the only reason why you feel so comfortable.

A performance that initially appeals to the video game nerd, with a plethora of inside jokes [Morganâ€™s character, Joy often suffers from panic attacks and recites the Konami code of Up, up, down, down, left, right, left, right, B, A, Start, to calm herself down], is quickly transformed into a piece about life, love, trust and the human condition. Over the course of two hours, there will be plenty of laughs and possibly even some tears, depending on how mushy you are.

Because of this, itâ€™s a play that can be enjoyed by an eclectic range of personalities, all of whom will get something different out of it.