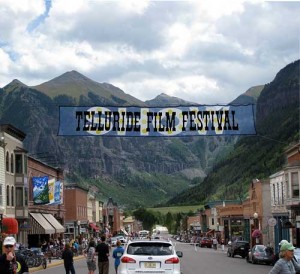 Telluride Film Festival Co-Director Julie Huntsinger comments, â€œTFF prides itself on loyal and personal relationships that deepen and enrich over time, as evidenced by the commitment of the majority of our passholders, filmmakers, and business partners, who come back every year toÂ stand shoulder-to-shoulder with us in supporting the best and the brightest talents of this year and future generations.”

This spirit of sustainability is reflected in TFF’s prestigious film programs that embrace classic treasures, world masters and the most buzzed-about movies, in the presence and celebration of iconic filmmakers and the freshest young talent; and in our portfolio of business partners from longstanding relationships with revered institutions and quality brands to alignment with exciting new companies and unique relationships with university and high school education providers.

AdditionalÂ Sneak PreviewsÂ may play outside the main program and will be announced on the Telluride Film Festival website:Â www.telluridefilmfestival.orgÂ over the course of the four-day weekend.

â€œWhile screening hundreds of new movies for selection, we are looking for narrative and non-fiction films that offer festival goers new experiences, both in the subject matter and the way the filmmakers tell their stories,â€ said Festival Co-Director Gary Meyer. â€œThis yearâ€™s program offers unique insights into the world today and past history. It is an especially strong year for films told by and about women.â€

The 2012Â Silver MedallionÂ Awards, given to recognize an artistâ€™s significant contribution to the world of cinema, go to director and producerÂ ROGER CORMANÂ who will presentÂ CORMANâ€™S WORLD: EXPLOITS OF A HOLLYWOOD REBELÂ (U.S., 2011),Â THE MASQUE OF THE RED DEATHÂ (U.S.-U.K., 1964) and (THE INTRUDERÂ (U.S., 1961); Academy Award-winning actressÂ MARION COTILLARDÂ (LA VIE EN ROSE) who stars in TFF selectionÂ RUST & BONE; and Danish actorÂ MADS MIKKELSENÂ who stars in two TFF selections:Â THE HUNTÂ andÂ A ROYAL AFFAIR.

â€œAt the core of each yearâ€™s Festival are the Tributes that allow our audiences a chance to gain insight into the creative process of the filmmakers and actors being celebrated,â€ said Co-Director Tom Luddy. â€œWe are especially pleased with the balance this year, beginning with director/producer, Roger Corman, who has helped launch so many important careers. Then actress Marion Cotillard, whose early career in French films brought her to the attention of the worldâ€™s filmmakers and now stars in both European and American movies. Finally there is Mads Mikkelsen, the Danish actor whose powerful performances have brought him much international attention and increasing audience awareness in America.â€

A Spotlight will shine on the work and career of director Jack Garfein including screenings of his two movies,SOMETHING WILDÂ (U.S., 1961); andÂ THE STRANGE ONEÂ (U.S., 1957) plus a conversation led by film critic Kim Morgan.

Telluride Film Festivalâ€™sÂ Education ProgramsÂ present students the opportunity to experience film as an art and expand participantsâ€™ worldview through film screenings and filmmaker discussions. Celebrating its 24th year, theÂ Student SymposiumÂ provides 50 graduate and undergraduate college students a weekend-long immersion in cinema. TheÂ City Lights Project, now in its 13thÂ year,Â brings fifteen high school students and five teachers from three divergent schools the opportunity to participate in a concentrated program of screenings and discussions. In 2011, TFF and UCLAâ€™s School of Theater, Film and Television (UCLA/TFT) launchedÂ FilmLAB, an extraordinary new program giving ten outstanding graduate film students from UCLA/TFT the opportunity to attend the festival and learn from the greatest filmmakers in the world in a workshop/lab setting: and,Â For The Love Of Movies,Â a Los Angeles High School Screening Program focusing on the most creatively promising and under-served young talent featuring the â€œBestâ€ of Telluride Film Festival, managed by UCLA-TFT graduate students and with the participation of selected filmmakers and TFT faculty.Â

Telluride Film Festivalâ€™sÂ Talking HeadsÂ programs allow attendees to go behind the scenes with the Festivalâ€™s special guests. SixÂ ConversationsÂ between Festival guests and the audience about cinema and culture, and three outdoorNoon SeminarsÂ feature a panel of Festival guests discussing a wide range of film topics. These programs are free and open to the public.

Book SigningsÂ will take place at the Festival hospitality center, Brigadoon, with TFF Poster ArtistÂ DAVE EGGERS, who will sign his latest novelÂ A Hologram for the King, his nonfictionÂ ZeitounÂ andÂ A Heartbreaking Work of Staggering Genius;Â JACK GARFEINÂ will sign his bookÂ Life and Acting;Â SALMAN RUSHDIEÂ will sign his classicÂ Midnightâ€™s Children;Â ERROL MORRISÂ will signÂ Seeing is Believing; and Guest DirectorÂ GEOFF DYERÂ will sign his award-winning books: the novelÂ Jeff in Venice, Death in Varanasi; Zona; Out of Sheer Rage;Â and his essaysÂ Otherwise Known as the Human Condition.

Corporate support at Telluride Film Festival plays an essential role in the life of the Festival andÂ underscores the Festivalâ€™s commitment to quality, adventure and distinction in the art of cinema.Â TFF is privileged to continue collaborating with some of the worldâ€™s most renowned brands, includingÂ FestivalÂ Land Rover, Mandarin Oriental Hotel Group,Â Stella ArtoisÂ which are each aligned with a unique feature of the festival, andÂ excited to welcome new partners this year including Aesop, Americas Film Conservancy,Â Audible.com, The London Hotels, Loyola Marymount University, Teatulia and The Hollywood Reporter.Â Equally, Telluride Film Festival has a long relationship with Hollywood and is extremely proud of its committed and longstanding industry supporters, The Academy of Motion Picture Arts and Sciences, Cinedigm, Dolby, Meyer Sound, Turner Classic Movies, Universal Studios and UCLA School of Theater, Film and Television.