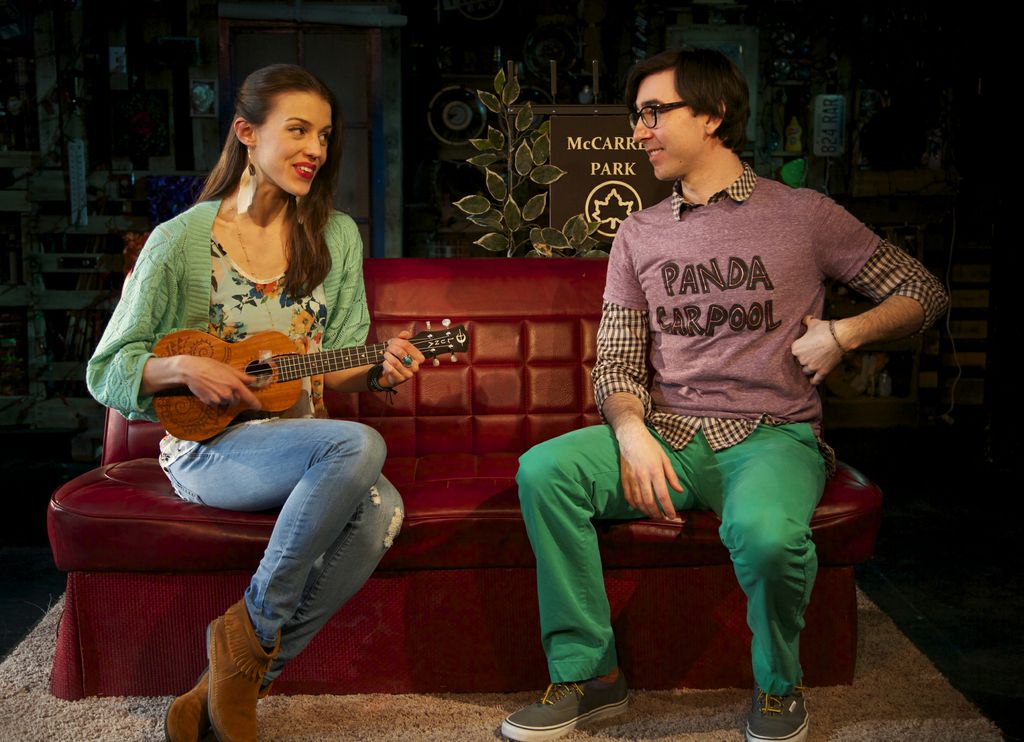 With memorable music, hilarious, but believable acting and a slew of twists, this production marvels.

Christian Mohammed Schwartzelberg (Max Crumb) isnâ€™t your typical Jewish 20-something in Brooklyn. A queer studies major in college and now a trained puppeteer, heâ€™s a hipster to the highest degree. When the adorable Julianna (Katherine Cozumel) comes to town, his life is changed forever. This could be it for Christian. Heâ€™s in love. But when his best frienemy and indie rocker Jake (Jason Gotay) meets the new flame, all of Christianâ€™s desires are in jeopardy.

Add in two other love stories, witty pop culture references (Michael Cera will love this play) and the type of dialogue that would make any â€œFriendsâ€ fan smile and you have an engaging performance that absolutely flies by. Itâ€™s almost sad when itâ€™s over.

The laughs and great music just never stop. Davisâ€™ script and music are almost in perfect harmony. Just when you get the hunkering for another fun, punk rock or silly track, it comes, almost naturally. Crumbâ€™s voice is solid, but itâ€™s Cozumel and Gotay that steal the show on vocals. Gotay tries hard to be a punker and although it works, heâ€™s more suited for the slower boy band-esque stuff he sings later on. Cozumel is beyond endearing with the ukelele. Imagine â€œJunoâ€ with extra heart.

Thatâ€™s not to say Crumb canâ€™t sing. The guy can totally rock. He just entertains more with his puppets, ranging from Noam Chomsky to The Cureâ€™s Robert Smith. Wacky, but inspiring, itâ€™s safe to say Crumbâ€™s character embodies the shy, lonely person in all of us. While he lacks the sex appeal of Gotay and some of the other characters, youâ€™ll instantly love him and enjoy his antics.

The other players include Tony (Douglas Widick), the stoner bassist in Jakeâ€™s band, Tonyâ€™s girlfriend and Jakeâ€™s â€œbestie,â€ Ivy (Dawn Cantwell) and the monosyllabic drummer (George Salazar). Widick may not have a tremendous role in the performance, but his bass playing and reggae-inspired songs are fun and serve as an excellent catalyst between the more serious scenes. The same thing goes for Salazar, whose facial expressions alone make him a hit. Cantwell may have the best voice on the cast and like Widick, does an excellent job of not being forgettable despite not having a lead role.

However, it is the sexy Arielle (Lisa Birnbaum) who makes the most of a small role. In the show-stealing scene, she sings about her bucket list, which is actually her own way of extending her own needed debauchery. Think Johnny Cashâ€™s â€œI Been Everywhere,â€ but with a more â€œinternalâ€ meaning. At the same time, Arielle has a heart and is able to connect the viewer to the storyâ€™s larger premise. For such a small role, Birnbaum captivates quickly and makes herself an important part of the production.

With not a wasted song and memorable cast-wide performances, â€œF#%king Up Everythingâ€ is easily a contender for best Off-Broadway show of the year and one that youâ€™ll tell all your friends about. â€œRock of Agesâ€ meets â€œHow I Met Your Mother,â€ this production has something for everybody.