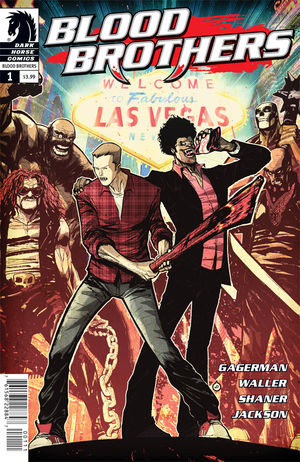 Review Fix chats with the uber funny Andrew Waller and Mike Gagerman who discuss their new comic book series â€œBlood Brothers.â€ Like â€œFamily Guyâ€ meets â€œTrue Blood,â€ itâ€™s all about rearranging history to suite your needs, with plenty of blood and sexual references thrown in for good measure.

Review Fix: What was the inspiration for the series?

Andrew Waller: Dark Horse came to us with an idea for a comic about two vampires who had been friends for a thousand years. Mike and I have been friends since high school, so we understand what kind of baggage a long term friendship brings with it.

Mike Gagerman: Am I baggage to you, now? Thatâ€™s it, weâ€™re breaking up.

Review Fix: What’s the creative process like? How do you guys work together?

Gagerman: We have a small office in Hollywood. Itâ€™s where the magic happens.

Waller: We spend most mornings trying to figure out what weâ€™re gonna order from Chiptole. Then we eat Chipotle. Then we get to workâ€¦Sometimes.

Gagerman: Or we watch old episodes of Frisky Dingo.

Waller: But generally we beat out a story together. Then one of us takes a first pass at the script. Then the other one follows behind, rewriting. This goes on until itâ€™s Chipotle time.

Review Fix: What did you guys read growing up? How do you believe it affected this series?

Waller: I was a big Spider-man and Daredevil reader as a kid. To me, those were grounded stories about guys who happened to be superheroes. Thatâ€™s what we hoped to do with Blood Brothers. Itâ€™s about two long time friends who happen to be vampires.

Gagerman: I mostly read Judy Blume, but Superfudge had no real influence on this book.

Review Fix: What are your goals for this series?

Waller: For people to read it and not say that it sucks on the internet.

Gagerman: Which is the equivalent of Total Comic Book Supremacy.

Gagerman: Our day job is as screenwriters and weâ€™re big fans of the action comedy genre, stuff like Lethal Weapon and Rush Hour. We hoped to bring some of that vibe into our books.

Review Fix: What was it like working with Evan Shaner?

Gagerman: He was great. Really collaborative.

Waller: This was our first comic book, so the fact that he was patient was a real plus.

Waller: My Mom was a big fan.

Gagerman: Dudes. Dudes will like this book. And cool chicks that can hang with dudes.

Review Fix: How do you want the series to be remembered a few years from now?

Waller: As our first step on the path to global superstardom.

Gagerman: Well, we broke up earlier in this interview, so I will always remember it fondly as the last project we ever wrote together.

Waller: What if I buy you Chipotle? You can get barbacoa.

Gagerman: Ok, maybe weâ€™ll give it another shot.