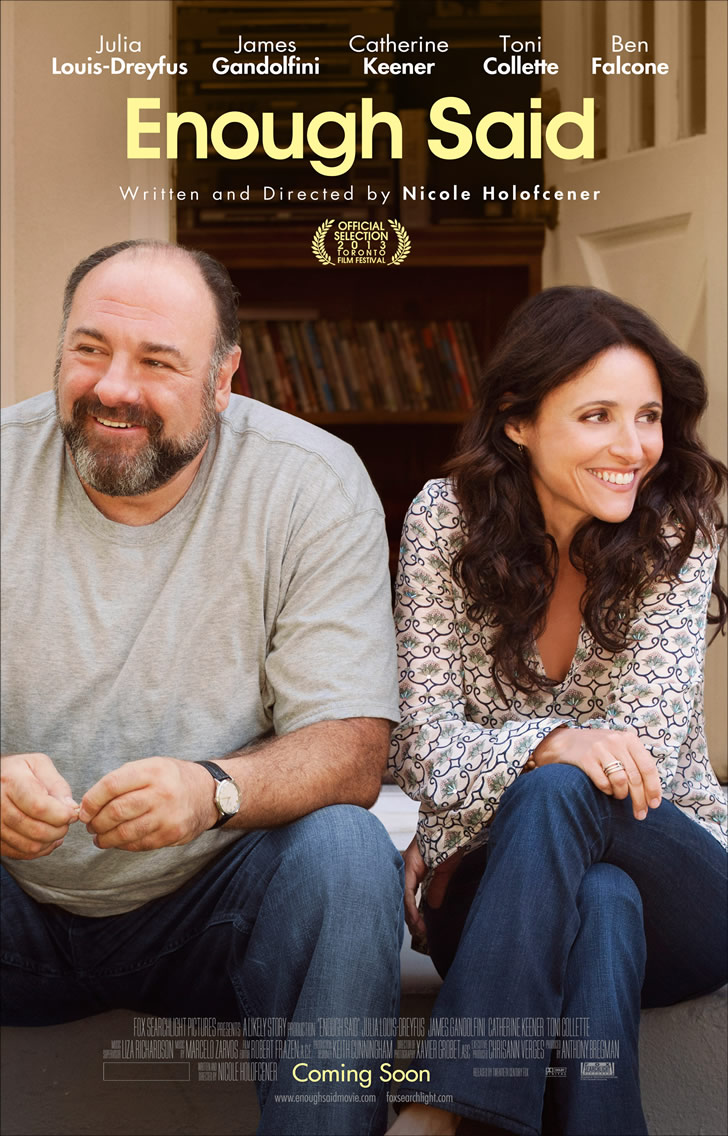 Genuine is a word used to define very few things – usually beer; but itâ€™s a word that gets to the heart of Nicole Holofcenerâ€™s vision for â€œEnough Said.â€

The Julia Louis-Dreyfus/James Gandolfini romantic comedy is filled with moments that feel true to life and that I myself have gone though. Writer/director Nicole Holofcener’s keenly observed behavior is what sells this movie. It also lets the viewer see that James Gandolfini was truly an actor and not just a mob boss on some show on a cable network years ago. His depth as an actor is on full display here. He makes you smile, chuckle and care for him in a way that makes you truly wonder why you havenâ€™t seen more of his movies.

Gandolfini who plays Albert is serendipitously brought together with Julia Louis-Dreyfusâ€™ Eva. Together the lovers embark on a relationship journey rarely seen on screen; that of the middle aged divorcee. Still, like any other relationship movie, especially a romantic comedy it boils down to two people drawn together and then brought at odds with each other.

Holofcenerâ€™s ability to unearth qualities we didn’t know existed in familiar performers. Louis-Dreyfus is still very funny/awkward in “Enough Said,” which is something of a specialty of hers, but she’s also completely believable as a befuddled massage therapist who knows her life is on the brink of something but can’t figure out what. And Gandolfini is warm and soulful as Louis-Dreyfus’ lover, who seems to be a perfect fit until she realizes he is the ex-husband of a new friend and new-age poet/hippie Marianne, played capably by Catherine Keener.

The movie also brings up a point that is rarely talked about in real life and especially on screen. How do you talk about your former husband/wife? Sure we have the bff that trashes the ex but that is a trope used to often. And the friends in this movie do very little to trash the exâ€™s which was refreshing. This movie brings the question up multiple times and with bravado unseen in the rom/com genre. Kenner was excellent as a foil to Evaâ€™s relationship with Albert but the beauty of it was that it was unintentional.

Beauty is defined by what each of us wants in a person, but when we have all that we want and allows our view to be colored by the experiences of another are we truly likeable? It is a point of view that Holofcener wants you to ponder. At least I asked it as I left the theater. Just because one person didnâ€™t like another for their quirks or misgivings, doesnâ€™t mean that y someone else wouldnâ€™t find those qualities appealing.

But itâ€™s the qualities that are present in Eva and Albert that make it both sad and funny. Like a scene where Gandolfini and Louis-Dreyfus share an intimate moment she says, “I’m tired of being funny.” “Me, too,” Albert agrees, to which she replies, “But you’re not funny.”

I don’t think there’s been a movie this year packed with enough of these honest and heartbreaking moments.

I think Iâ€™ll go watch it again and hope those onion-slicing ninjas donâ€™t sit next to me.