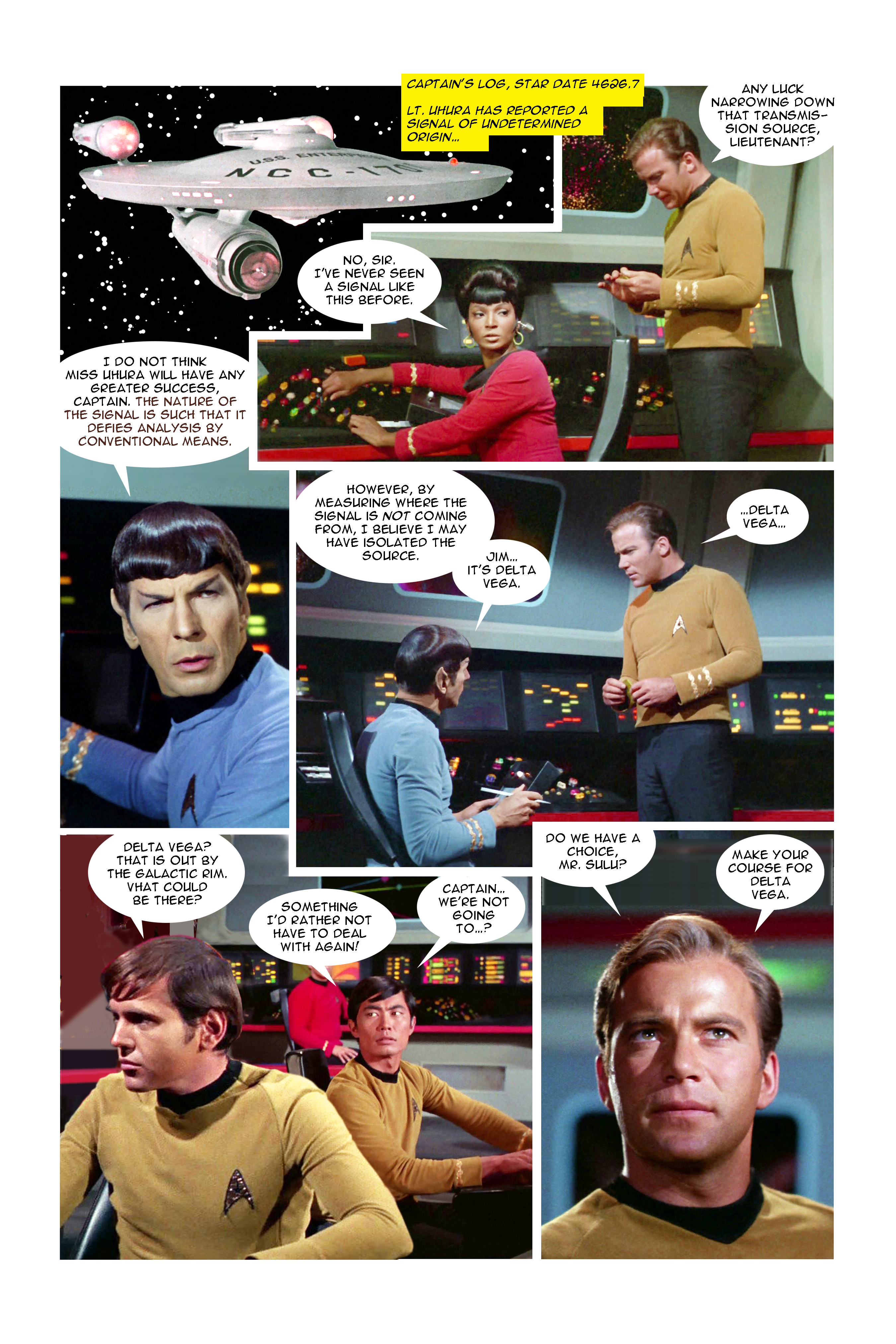 The Most Unique â€œPhotonovelâ€ Ever Coming This December

John Byrne is no stranger to breaking new ground and he is doing it again with the extra-length Star Trek Annual 2013, arriving this December from IDW.

Byrne returns to the Star Trek universe in an entirely unexpected wayâ€”for this annual, he has created a completely original Star Trek story that plays out like a â€œlost episode,â€ using a uniquely constructed photomontage to create an entirely new story. â€œStrange New Worldsâ€ serves as a direct sequel to the fan-favorite episode, â€œWhere No Man Has Gone Before,â€ which aired as the third episode of Star Trekâ€™s first season in 1966.

“There was a visual richness to that second pilot that really drew me in,” said writer/artist John Byrne, “and since I have long wanted to experiment with something like this project, that episode seemed the perfect choice for a sequel.”

Years ago, James Kirk saved his ship, but the price was the life of his oldest friend in Starfleetâ€”or was it? Fans will see Gary Mitchellâ€™s story take a surprising turn in this story. But the uniqueness of this project does not end with the plotline; rather, it continues with the photomontage art form that Byrne has chosen to tell this original story. Star Trek photonovels, in which a book was created by adapting a film or television episode using actual film stills in place of traditional artwork, with narrative text and dialogue presented in word balloons, were popular in the late 1970s. But this is where the past becomes the futureâ€”Byrne didnâ€™t just insert film stills, he created them. In order to tell a new Star Trek story in this â€œfumettiâ€ style, he did much more than pluck existing images, instead compositing together multiple pieces of film stills and manipulating them to tell the exact story he wanted.

â€œThis project started out as just a fun diversion for John in between other projects,â€ said Editor-in-Chief Chris Ryall, â€œand as is wont to happen with JB, it continued to grow and become something much bigger than his original intent. Itâ€™s a blast to see an â€˜all-newâ€™ original series episode done this way. Byrne has produced over 500 pages of Star Trek comics for us already, but I can promise readers that theyâ€™ve never seen this kind of Star Trek comic from him before.â€

Star Trek Annual 2013, a 48-page issue, is under license by CBS Consumer Products and will be in stores third week of December.

Review Fix chats with playwright Ran Xia, who discusses her upcoming run of â€œWord Playâ€ at the Midtown International Theatre...