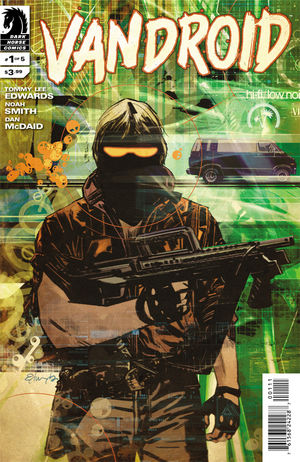 The 1980s were a perfect time for truly horrific sci-fi b-movies. Movies like â€œThey Liveâ€ and â€œToxic Crusaderâ€ thrived. â€œVandroidâ€ is a comic just like those movies except this one will be found packaged with twenty other movies in the bargain bin at Target.

â€œVandroidâ€ is based on the screenplay of a movie of the same name that was never completed due to a freak fire that destroyed the studio. Here, a scientist asks his old friend to make a homemade robot that will be implanted with an AI he created. What happens is the AI has a major self-defense system that kills practically everything because it views everything as a threat. On top of that, the thinks heâ€™s its creator.

Why anyone would want to revive this movie or turn the screenplay into a comic is a mystery. This story is exactly like those b-grade 80s sci-fi movies that barely have any story except things get destroyed and terrible acting. The story has very little structure and the characters arenâ€™t at all interesting. The story jumps from one scene to the next without any rhyme or reason. It destroyed the pacing.

On top of that, the AI is essentially HAL 9000 in a body without the likable personality. Yes, robots like HAL 9000 and the Terminator were killer robots but at least they had personalities. They were well written, had memorable lines and were developed. This robot is more like something youâ€™d see on an episode of a SyFy Channel show and then it gets destroyed.

Away from the weak story, the art is just as terrible. The art looks like it was drawn by one of those low budget1980s artists who think they can draw well but canâ€™t. The characters are proportioned improperly and the facial expressions are just so ugly to look at. Not to mention the colors used look like somebody vomited them up.

â€œVandroidâ€ is a horrendous comic with a story and art that shouldâ€™ve stayed in the 1980s. That freak fire was a message telling the world that this project should not be completed in any shape or form.