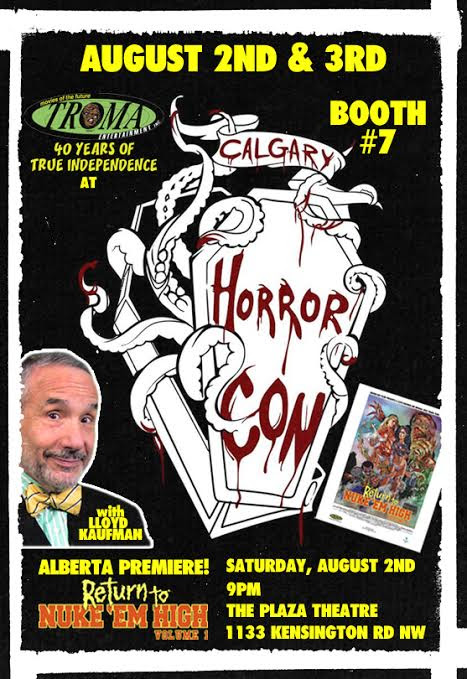 TromaÂ President & Creator of theÂ “Toxic Avenger,”Â Lloyd Kaufman has been invited to the Calgary Horror Con this weekend as a guest of honor to present his latest Tro-Masterpiece “Return to Nuke ‘Em High: Vol. 1” to Calgary filmgoers for the first time ever!

On SaturdayÂ nightÂ August 2nd at 9pmÂ the curtains will rise at the historic Plaza Theatre. Legendary director Lloyd Kaufman will introduce the first volume of his Sistine Chapel film in this Exclusive One-Night-Only Premiere. After the screening he will participateÂ in a crowd-interactive Q & A session followed by aÂ Meet & GreetÂ in the lobby.

Tickets are going fast but you can reserve your seats now by pre-ordering ticketsÂ here.

You can meet Lloyd Kaufman & Toxie at the Troma Booth (Booth #17) thisÂ Saturday August 2ndbefore the Premiere as well as onÂ Sunday August 3rd. Â As alwaysÂ Lloyd never charges for his signature on any Tromabilia or for photographs!

Also Premiering in Calgary at the convention will be Troma Entertainment’s up-coming release “Pro Wrestlers Vs Zombies” atÂ 12:30pm on Sunday August 3rd. Starring such wrestling legends as “Rowdy” Roddy Piper, Olympic Gold Medalist Kurt Angle, and “Hacksaw” Jim Duggan see why this film has been getting (g)rave reviews!

Come out and celebrate Troma’s 40th Anniversary with us at the Calgary Horror Con and come to the must-see Premiere of Lloyd Kaufman’s award-winning Tro-Masterpiece “Return to Nuke ‘Em High: Vol. 1” – The film that made it’s debut at the Cannes Film Festival, was selected by the Museum of Modern Art for their prestigious “Contenders” series, and been honored by the world-reknowned American Cinematheque.Â And get ready to Return to Nuke ‘Em High!Â