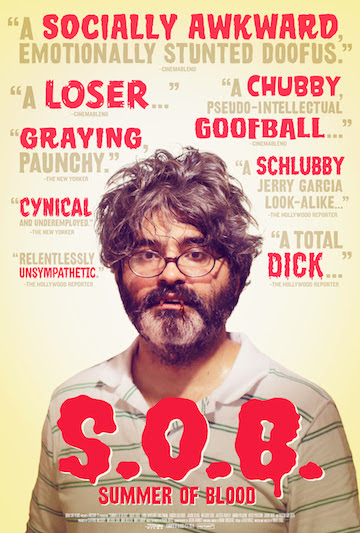 Vampires and comedy rarely mix well and Onur Tukel’s â€œSummer of Blood” doesn’t either, quickly becoming a movie that will make you want to bite your own neck, bleed to death and like it.

Erik Sparrow (Onur Tukel) is a socially awkward, immoral, lazy bastard who breaks up with his girlfriend after she proposed to him and said no. He tries again, but everything from dating to his work life suffers because of his personality. He then gets bitten by a vampire and everything changes.

This is by far one the worst vampire movies ever made. In fact, Erik doesnâ€™t even become a vampire until the forty-minute mark. Before all we see is Eric trying to get a girlfriend and/or trying to get his ex-girlfriend back. Those forty minutes are nothing more than Erik being an ass and getting the cold shoulder from the women he dates.

One major thing this movie fails to do is try to make us like Erik. Itâ€™s hard to do when you make your main lead out to be one of the worst human beings ever. Everything bad that happens to him he deserves, when he gets his vampiric powers he uses them to get everything he wants and he learns absolutely nothing. Itâ€™s almost as if the movie expects us to identify with him when on the contrary we want to stab his heart with a stake.

The acting ranges from decent to campy. Not the entertaining campy, but the â€œplease, shut upâ€ campy. The most memorable scene is when Erik has fully become a vampire and one of the girls he just had sex with opens up his curtains. The performance by Tukel has enough ham to fill â€œBoarâ€™s Headâ€ factory. The rest of the time the cast is trying their best to put on good performances but the script doesnâ€™t help much.

The main thing this movie tries to be is a comedy. The problem is the humor here boils down to pretentious observations and sex jokes. None of them work, are funny or are they delivered properly. There may be one or times when the audience will give a slight chuckle, but thatâ€™s it.

â€œSummer of Bloodâ€ is a failure of both a vampire and comedy movie. The story is terrible, the acting is sub-par at best, the plot non-existent and the humor is unfunny. The best thing for this movie is for somebody to drive a stake through its heart and bury it with Jimmy Hoffa at Giants Stadium.