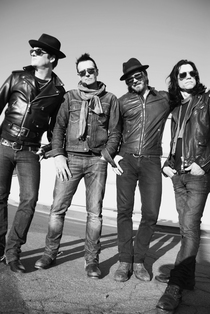 Review Fix chats with Alternative Rock Legend Scott Weiland, who discusses his new band, Weiland and the Wildabouts and their new album, â€œBlaster.â€

Weiland and the Wildabouts, also consists of guitarist Jeremy Brown, bassist Tommy Black and drummer Danny Thompson, arenâ€™t a band that were formed overnight. After years of jamming together, they began touring for several months in 2013 and â€œhunkeredâ€ down in Weilandâ€™s Southern California studio and rehearsal space put â€œBlasterâ€ together.

Review Fix: How did this project come about?

Scott Weiland: Iâ€™ve been jamming / touring with these guys on and off for nine years. We used to be a five piece but we decided when talking about forming a band to make it a four piece. A bigger sound with more space between the notesâ€¦the space is equally as important as the notes.

Review Fix: What do you think makes this band unique?

Weiland: I think that weâ€™re unique because of the sounds that we set out to create. We wanted to find a sound before we even set out to write and record.

Review Fix: All great singers go through stages in their careers. Where do you think you are now?

Weiland: Iâ€™m at a whole new, exciting stage. Itâ€™s like starting from scratch. Iâ€™ve been lucky to have three stages in my career with three totally unique bands.

Review Fix: How was “Modzilla” written, is there a story behind the lyrics?

Weiland: Jeremy Brown, our guitar player, came in with a home demo of this song instrumentally. So we worked it out and I put the lyrics and the melody down. The lyrics are just a trip to listen toâ€¦delivered with an almost rapid fire, hip-hop like approach. But itâ€™s not my life or my story. Who knows, maybe someone will relate to it.

Review Fix: What about “Way She Moves”? It’s a little more funkier than the stuff you’re known for, but you sound comfortable vocally there.

Weiland: When I heard the riff and rhythms I thought it had a T.Rex meets Love and Rockets vibeâ€¦I just rode the wave of expression.

Review Fix: Who are some musicians you really appreciate that people wouldn’t expect?

Review Fix: What do you think you have left to prove in music?

Weiland: Iâ€™ve always got something to prove. As an artist youâ€™ve got to stay fresh and always have a dream.

Review Fix: What are your hopes for this project?

Weiland: For it to be very successful and play around the world.

Weiland: With everything I doâ€¦own it.