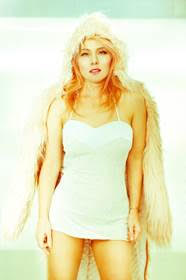 Review Fix: When did you make the switch from acting to music?

Meital Dohan:Â Well I’m very much both an actress and a singer, but music came into my life at an unexpected time. I was in Israel a few years ago participating in ‘Dancing With The Stars’ and a spiritual guide of mine told me I should make music. Aren’t I a sucker? No, I’m not. IÂ didn’t believe her, but look whatÂ happened.

Review Fix: How do you think your acting career helps you as a musician?

Dohan:Â It’s like transitioning from a sculpture to a painter. It’s a form of expression with different material. Of course growing up performing in theatre, filmÂ and TVÂ for big audiencesÂ helps when all of a sudden you find yourself singing to them, and making some naughty moves.

Review Fix: Who inspires you?

Dohan:Â I take inspiration from everywhere — a lot of my biggestÂ inspirations span genre and form. I love artists that aren’t afraid to say “fuck you” and break the rules. I really love Andy Warhol and Godard — all the way to artists like Nina Simone, Madonna, Prince and Kanye West.

Review Fix: How wasÂ Â “I’m Too Sad To Tell You” written? What is the song about?

Dohan:Â The song was written by Amos Kollek and was written as part of a sound track to a movie we shot together. It’s about love and life almost like every song but with different lyrics.

Dohan:Â There’s so much going on right now, it’s quite exciting! I’m recording new music which is always a blast. I have a film project, and another secret project underway – but mum’s the word until it’s out!