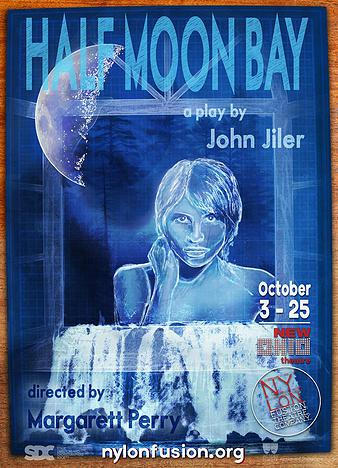 Presented by Nylon Fusion Theatre Company on the stage of New Ohio Theatre, “Half Moon Bay” is the story of love and obsession taken to extreme. It shows us in an unrealistic, even caricature-like way how infatuation with someone can ruin a perfect life. Since the story is told by a Nick-Carraway-type of narrator, in a first person non-protagonist point of view, we get the distorted, spiced up with sarcasm version of events. For this reason, one may find the characters and their emotions blown-out of proportion and unbelievable.

At the same time, love does intoxicate us, making us lose coordination and common sense. It can move a person to sacrifice his or her life or comfort for the loved one. We cannot always rationalize why seeing someone brings a smile to our faces and why rejection only draws us closer to the objects of our desire. Hence, what makes us relate to the characters of “Half Moon Bay” is the fact that we all have “at least been obsessed with somebody,” even if it wasn’t quite to the same extent.

As envisioned by the playwright John Jiler and the director Margarett Perry, love affects the protagonist, Richie (Ben Gougeon), like a mental disease, preventing him from thinking rationally. He is married to a wonderful woman, Pam (Jean Goto). Not only is she successful in her own career, she also supports him in all his professional and personal endeavors. Moreover, Pam adores and admires Richie. They still desire each other passionately and they are about to become parents. He has everything a man can dream of, but he ruins his idyllic marriage when he can no longer control his obsession with a half-witted waitress, Alicia (Ivette Dumeng).

In order to highlight the extent of this absurd behavior and ridicule it, the author has the secondary character tell the story. The narrator, Tom (Brennan Taylor), is a friend and confidante to both Richie and Pam and, thus, gets indirectly involved in their drama. With his sarcastic and witty remarks, he sounds like the voice of reason in the middle of chaos. He also passes judgment on his friend when he says to the audience, â€œHeâ€™s ruined the life of one of the most amazing women,â€ for Pam â€œwas the most positive personâ€ Tom has ever known. He is disappointed in Richie and frowns at his infatuation.

And how could he not? Alicia is the absolute opposite of Pam. She doesn’t talk much. She has vague memories of her past and can’t remember (or refuses to tell Richie) where she came from. Furthermore, in a conversation with Tom Richie calls her “an unvarnished piece of wood,” which is demeaning rather than romantic. Nevertheless, he is drawn to her so much that he disregards his responsibilities as a husband and father.

So unlike the traditional femme fatale type, Alicia shows only the simplest emotions, as she is absent-minded and functions on some medication. She cries when something upsets her; she rarely smiles and she walks away when she is done with the conversation. While other actorsâ€™ repertoire ranges from exultation to hatred, Miss Dumeng manages to remain calm and express little, which builds the wall between Alicia and other characters, as well as between Alicia and the audience.

For this reason, the viewers, just like Richie, find the waitress the most interesting person in the play. Her mysteriousness makes us impatient to learn her story, and we feel cheated every time she walks out on the protagonist and us with her usual â€œI have to go.â€

But, after all, as Tom rightly notes, â€œAll thatâ€™s necessary for two people to be happy is to say â€œyesâ€ to each other at the same time.â€ Thatâ€™s the golden rule we should all follow in our relationships. Sometimes it happens right away. Sometimes we have to wait. More often than not we end up walking away and finding our happiness elsewhere. Watching Richie make his decisions reminds us a lot of our own dilemmas, which moves us to sympathize with him, even though we, like Tom, cannot understand or approve of his actions.