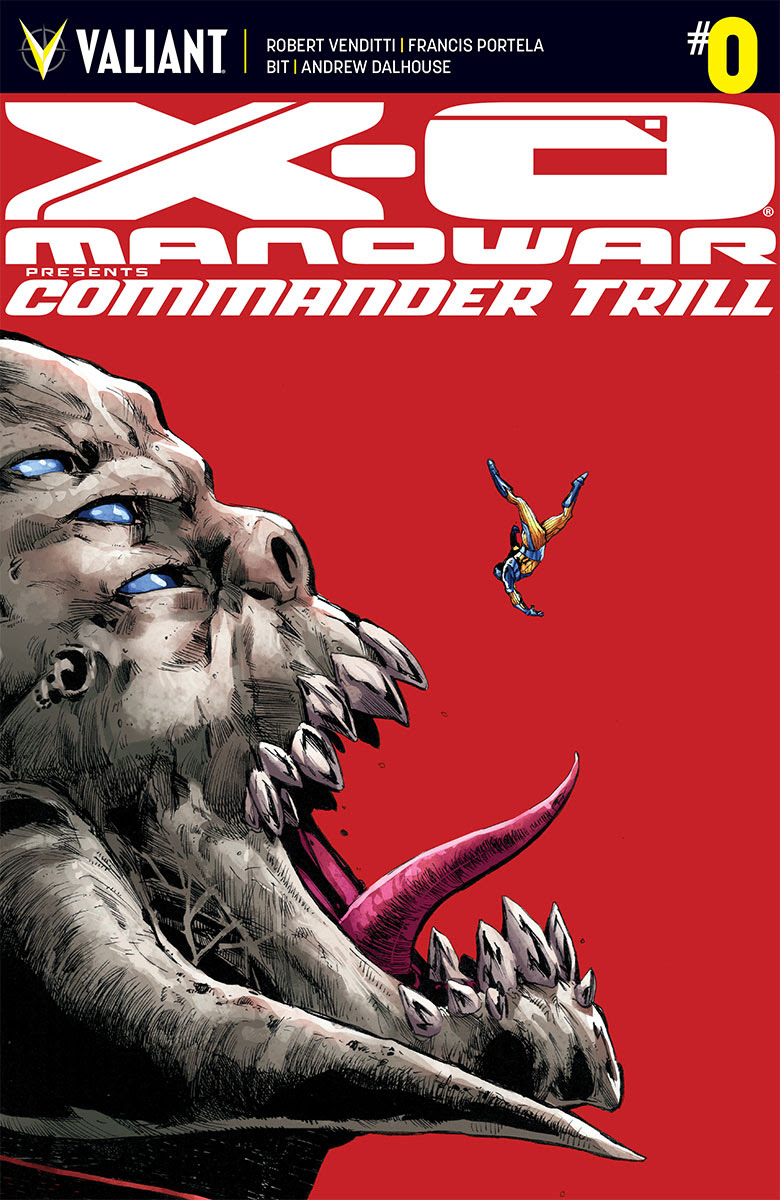 What is it about villains? They seem to be singularly obsessive in getting what they want. Traits that are admirable in most people take on a taint when it comes to the evil-doer; the one who wants to eliminate the hero. Sometimes the bad guy is complicated. Take Thanos in the Marvel Universe. His obsession with death started in childhood where he experienced several traumas and metastasized to the point where he nearly destroyed reality itself. But there are other times where villains are created through a need to possess something they do not understand.

Such is the case in “X-O Manowar: Commander Trill.” The Valiant universe knows Trill mostly through his association with Aric, the Visigoth who was stolen from his family and enslaved by aliens known as the Vine. Yearning to escape and return to his family, Aric somehow dons the X-O Manowar armor and returns to earth, but its centuries later. Aric makes a life for himself, battles Trill who somehow follows him and tries to negotiate a peace between earth dwellers and the Vine. The audience knows Aric’s story well. After all he’s a warrior fighting the good fight. What the audience isn’t aware of is why does Trill hate Aric with a burning intensity of a 1,000 suns? Perhaps it is because Trill sees Aric as an interloper, someone who is unworthy of wielding the power of the Manowar armor. So his lone need in life is to gain back what never belonged to him in the first place.

It’s sad really, to never be called for what you believe is your destiny. Still, Robert Venditti doesn’t make Trill some pathetic entity. Instead, he shows how a misguided vendetta has the potential to destroy two civilizations. It also gives a welcome glimpse into the type of person cast as the villain. History has built up men like Napoleon Bonaparte, a man who legend says nearly had all of Europe under his boot. Then he met his Waterloo. That battle was actually under the command of both Wellington and Gebhard Von Blucher. Yet historically speaking Blucher is rarely if ever mentioned. Instead, Bonaparte’s surrender is to Wellington, it has to be. An adversary is only as great as his enemy. The bigger the enemy, the bigger the intrigue are what make great drama. Wellington has to be on an at least equal measure to the man he defeats and he has to do it alone. Venditti must also make Trill great, but at the same time, he must give Trill something the audience can empathize with.

It’s a challenge to sustain this even if the series is a short one. The reader knows how Trill ends up which makes the journey that much more important. It’s a balancing act that seems uneven in this first issue. So much of Trill’s history is packed in this first installment that you don’t get a chance to see the effects his childhood has on his adult obsession. It’s almost as if having normal parents is worse than being raised by monsters. Important parts of his life seemed to be glossed over for time’s sake. This makes Trill’s narrative as an adult vital to the storyline.

In order not to make this a one-dimensional comic series one hopes the reader will get to see more than just a motivation to reclaim what was never rightfully his. Trill is a strong character who is worth exploring. And after being entrusted with such well-established characters as Green Lantern and the Flash, Venditti seems capable to interweave the Valiant universe into Trill’s story. One anticipates that he will not disappoint.

About Donna-Lyn Washington 618 Articles
Donna-lyn Washington has a M.A. in English from Brooklyn College. She is currently teaching at Kingsborough Community College where her love of comics and pop culture play key parts in helping her students move forward in their academic careers. As a senior writer for ReviewFix she has been able to explore a variety of worlds through comics, film and television and has met some interesting writers and artists along the way. Donna-lyn does a weekly podcast reviewing indie comics and has also contributed entries to the 'Encyclopedia of Black Comics,’ the academic anthology ‘Critical Insights: Frank Yerby’ and is the editor for the upcoming book, ‘Conversations With: John Jennings.’

New Jersey's Man Overboard  recently released his very own Acoustic Covers- Volume One.  It's composed of covers of two hit...