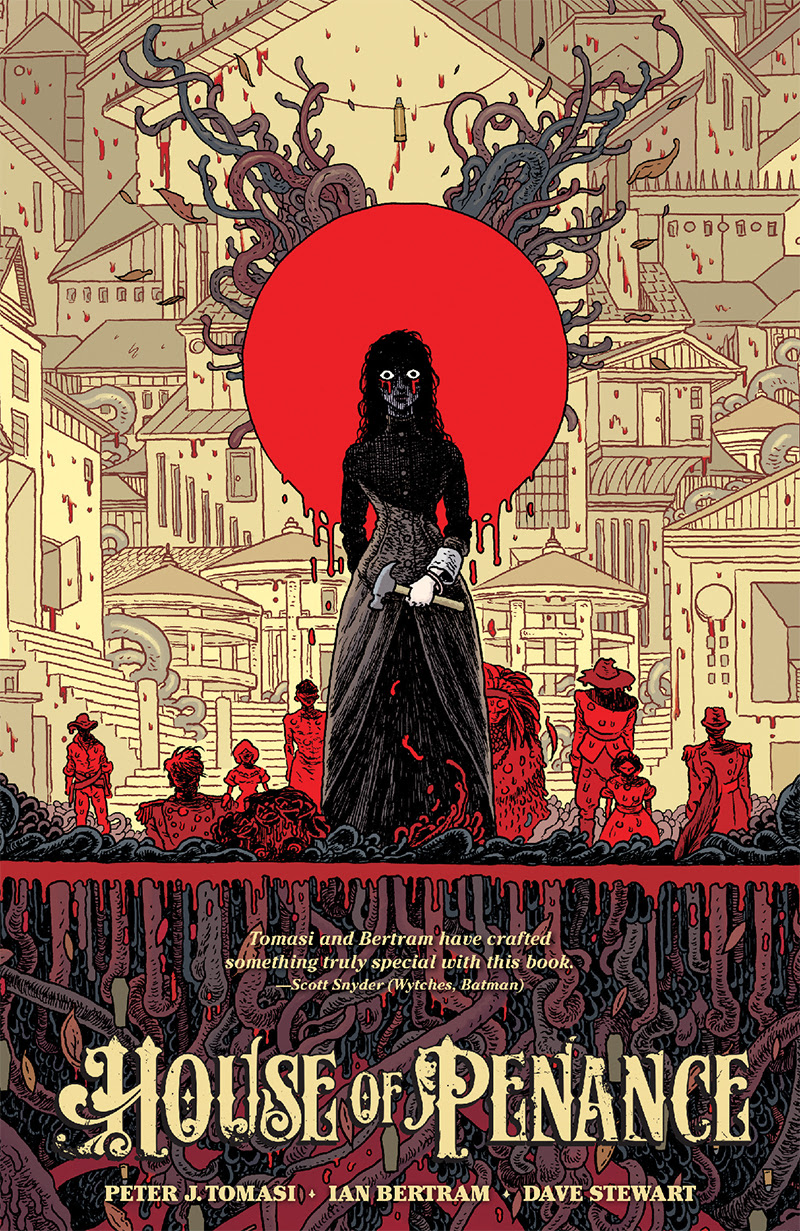 Some of the craziest, unbelievable stories can oftentimes be true. Take Sarah Winchester, so overtaken with grief over the deaths of her husband and child she moves west and builds a mansion with stairs leading to nowhere, windows built within rooms and clear-glass doors for the bathrooms. The building of a monolith with a seemingly mentally disturbed owner is ripe for a good ghost story. And throughout Peter J. Tomasi’s “House of Penance” there is an incessant cantor of banging that sounds much like a succession of gunshots. Yes, the firing of a gun is better served in this narrative for an abundance of reasons.

When you see the name Winchester some may think of the television series “Supernatural” (where legends, history and folklore meld into a well-crafted show for over 10 years) or the gun that ruled the west. For Sarah that name is synonymous with death and pain. While interviewing workers for her grand mansion she sees their crimes. They’re killers, cutthroats who would see the world burn. These men say they are only passing through but give up their guns and wind up staying. Why? What is drawing them to this monstrosity of a house? One possibility may be that the house or rather the owner is possessed. Sarah seems to be haunted by the deaths of anyone who has been gunned down. And perhaps the only way for her to repent is to have these men out of society, unarmed.

A descent into madness is a serviceable storyline, but where is Tomasi taking the reader? So far in issue one there are glints of the macabre and unexpected violence. They fit into context, however it feels like a one trick pony. As an audience you get it, a woman goes crazy in the late 19th century and cocoons herself in a place where she can feel safe while speaking to her dead family. The one saving grace that will keep you turning the pages is the one man who is also passing through. His underlying narrative is the more interesting of the two. Killing seems to begin having an effect on this man at a most inconvenient time. If the subplot comes to the forefront in the second issue, then the slow burn will be worth it. Still something needs to happen soon to keep the reader interested.

If the narrative doesn’t grab you right away the artwork will definitely keep you invested. Characters are well-drawn. They look like real people and there’s a liquid type movement where the action leaps off the page. At times you will feel that the words are getting in the way of a great story. Not every moment needs dialogue and Ian Bertram proves that the comic book medium can be a fulfilling, visual artistic endeavor.

Good stories take time to grow and “House of Penance” looks promising. Yet one can’t help but think of the Mark Waid and Alex Ross’ “Kingdom Come” miniseries where art and language were a seamless, collaborative effort. That for many is considered the standard. If Tomasi can match up to Bertram in issue two, then this series could be something special.

About Donna-Lyn Washington 609 Articles
Donna-lyn Washington has a M.A. in English from Brooklyn College. She is currently teaching at Kingsborough Community College where her love of comics and pop culture play key parts in helping her students move forward in their academic careers. As a senior writer for ReviewFix she has been able to explore a variety of worlds through comics, film and television and has met some interesting writers and artists along the way. Donna-lyn does a weekly podcast reviewing indie comics and has also contributed entries to the 'Encyclopedia of Black Comics,’ the academic anthology ‘Critical Insights: Frank Yerby’ and is the editor for the upcoming book, ‘Conversations With: John Jennings.’