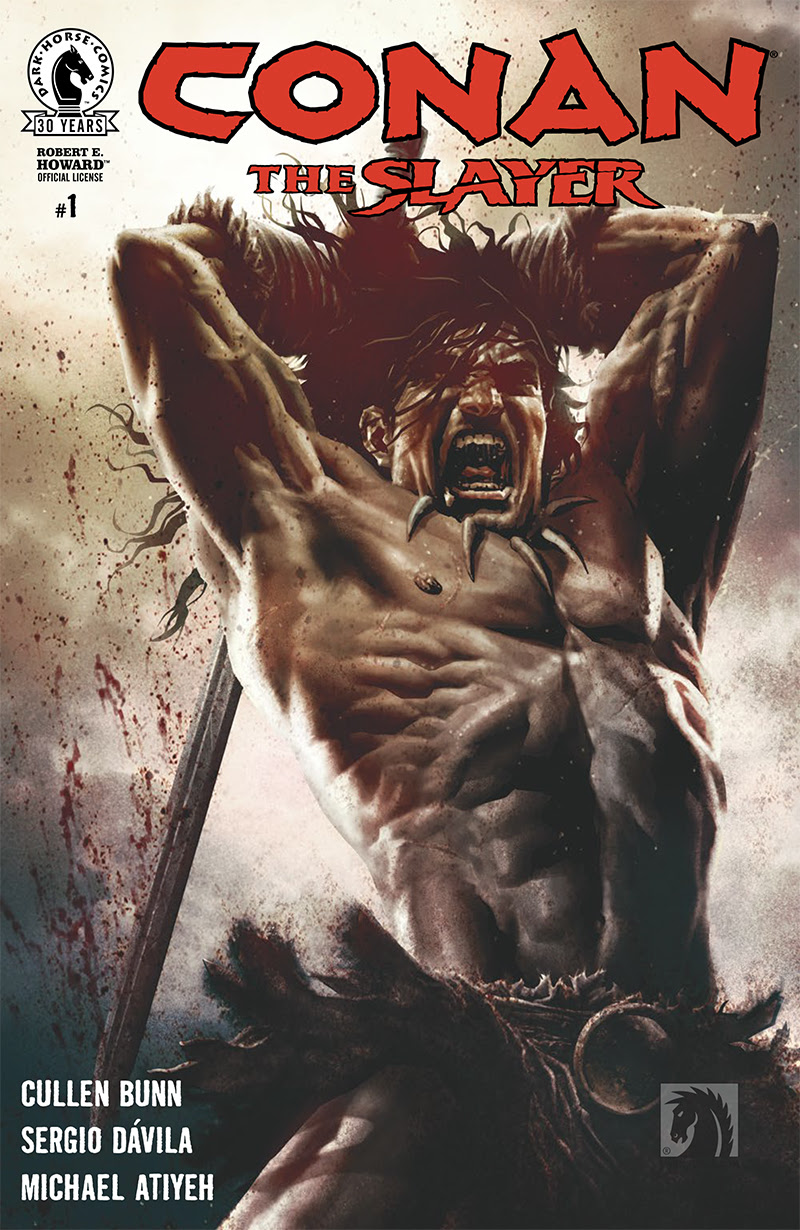 Barbarian does not mean brute or fool. Rather a barbarian is a foreigner, an immigrant who enters a strange land. In Conanâ€™s case he is a warrior, a man who has left behind the ruins of his own hubris. In the first issue of Conan the Slayer, the Cimmerian shows just how ruthless he can be, even with several arrows sticking out of him. And there is a scope of reflection â€“ that tends to happen when youâ€™re at the end of your life. But this is issue one and it feels pregnant with possibilities.

In this reboot of Conan, he is not a savior or a hero. Instead he is a man filled with regret. There are classic Robert E. Howard (the creator of Conan and some would say the sword and sorcery genre) elements to this version. And, in this as with any successful incarnation, Conan is able to wield a sword and his tongue is just as sharp. Cullen Bunn has the narrative aspect down pat. Then there is Sergio Davila et alâ€™s clean lines and economical artwork. Together it shows that even as Conan escapes a massacre and goes into an unknown future in an unforgiving wasteland, there is still a sense that he canâ€™t be defeated. Heâ€™s still mythical and unbroken. Still, thereâ€™s a realness too.

In any good first issue where swords rule and people dress in straps of cloth you need not only a good story, but antagonists who can measure up to a legendary character. Here the reader does not know if the people Conan encounters will be allies or potential executioners. It also seems that in this world women are more trustworthy and ruthless with tasks of violence. Bunn seems to be an equal opportunity storyteller, he goes to the place where the reader will be most satisfied. That includes surprises and moments you donâ€™t see coming. More importantly you see a complete Conan, not a one-dimensional movie or watered down television version. Instead, the reader enters the world of a man whose adversaries are just as smart, even if they may be two beats behind.

Attila, king of the Huns, though successful through many campaigns from the early 440s to the early 450s could never defeat Rome. His exploits were otherworldly, they had to be to make Rome seem greater than it was. You get the sense that this isnâ€™t whatâ€™s going to happen to Conan. In his case the hype is worth it. Even on the verge of passing out he can still take on and beat the hordes that seem to be after him. Better still you canâ€™t wait for issue two to see how he gets out his current predicament.

Bunnâ€™s continuation of the journey of Conan as a slayer makes you wonder. Is he going to slay men or his own inner demons? And how will he be stronger leading into a future title of Conan the king?