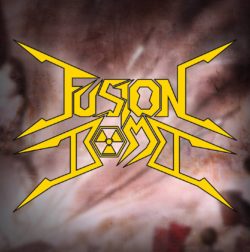 Review Fix: How did you guys get together?

Michel Nippel: Weâ€™ve been friends since childhood and somehow me, Scott, the drummer, got in touch with metal music. Mostly Heavy, Thrash and Power Metal at the time and so I influenced the rest of the members only Miguel listened to metal before and him I met in class.

Nippel: We come up with a concept, then write down possible song subjects that match with the concept. AfterwardÂ we start either with the lyrics but more often with riffs and add then drums and the rest. Very seldom we start with drum beats. After that first creative process a song takes some months to ripen in our rehearsal room and then itâ€™s ready to be published.

Review Fix: What do you think makes this band special?

Nippel: To be honest? Not much I think, maybe our subjects or the way weâ€™re dealing with them, our music, instrumentally, is pretty basic I think.

Review Fix: How would you describe your style?

Nippel: We play old school Thrash, but since we all listen to much Death Metal and I for my part have recently returned to classical Heavy and Speed Metal, itâ€™s not just stereotypical thrash. And we hate pizza-beer-thrash.

Review Fix: What are your goals for this album?

Nippel: We want to become a â€œknownâ€ underground band in the German scene, France would be nice too, but there we have less good connections.

Review Fix: What’s the standout song? Is there a story behind it?

Nippel: I think itâ€™s B.O.D., which is the abbreviation for Beertroopers of Death. It is about Â us, being those Beertroopers, as we are fucking up a bar. The lyrics are pretty rude, so I wonâ€™t speak them out here, you can check them out yourself if you are interested.

Nippel: Promoting our debut PRAVDA and then maybe a little touring.

About Patrick Hickey Jr. 12705 Articles
Patrick Hickey Jr. is the Founder, Editor-in-Chief, Master Jedi and Grand Pooh-bah of ReviewFix.com and is the author of the book, "The Minds Behind the Games: Interviews with Cult and Classic Video Game Developers," from leading academic and non-fiction publisher McFarland and Company. He is currently the Assistant Director of the Journalism Program at Kingsborough Community College and is a former News Editor at NBC Local Integrated Media and a National Video Games Writer at the late Examiner.com. He has also had articles and photos published in The New York Times, The New York Daily News, Complex and The Syracuse Post-Standard. Love him. Read him.

The initial gut feelings Atlus' new team-based shooter, "RIPD" gives are good ones. Solid visuals and enough references to the...